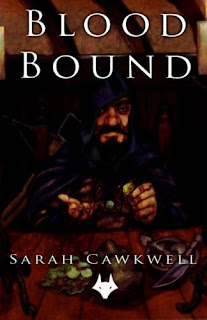 Do not be fooled by the length of this novella by Sarah Cawkwell. There is far more to this story than its 40 page length would have you believe; full of intrigue, action and supernatural horror all set in a land that any fantasy RPG would be happy to call home.

The author doesn't beat around the bush either, jumping straight into the action on the first page with a full-on description of a badly injured man running for his life after an encounter with a “...thing”. There is a palpable sense of urgency and fear in this flight through the darkened forest from an unknown pursuer that just hooks you in to the rest of the tale.

Switch to flashback and we start to learn a bit about this man's background and the events leading up to this hell-for-leather chase. Jareth De'roth is a thief. Not the best thief in Tiam, but still pretty good. Commissioned by a cloaked stranger to locate and retrieve an artefact, a locket, from The Dead Fields cemetery, Jareth is given the warning that it must be handed over “as it is found”. Completing this particular “acquisition of prime merchandise”, as the thief describes his occupation, seemed to be a fairly straightforward task to him, even easy, for the amount of money he had been paid by the stranger. That is, until Jareth inadvertently opens the cursed locket....

The story then takes a much darker turn as the aftermath of this seemingly innocent action unfolds in a gruesome way to return to the point at which we entered the story and an injured Jareth is running from the thing. Cue a totally unexpected plot twist and an eventual final battle worthy of any blockbuster movie and you have a highly satisfying conclusion which still leaves enough questions and possible openings for a continuation.

Even on re-reading and knowing what to expect, I found it immediately engaging with well constructed characters in believable surroundings. The story too worked on a second read because, even though I now knew the ending, I really enjoyed watching the build up and noticing the twists. Being a reader of the literary Classics, I absolutely loved the richly descriptive writing style and her use of complex vocabulary, but I realise that this may not be to everyone's taste. I also liked the clever application of the psychological aspects of horror as the story unfolds – the fear of the unknown, the fear of fear itself – as well as the physically graphic horror of the thing's description.

As I said at the start, this novella feels like so much more than it's length would have you believe. I read the whole thing in a single sitting and felt, at the end, that I had read a full novel because it was so rich and complete a work. Highly recommended for a satisfying fantasy tale.