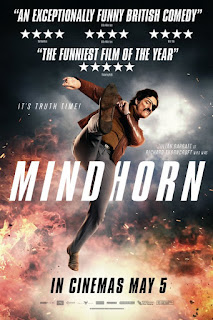 
I love Julian Barratt. I love Mighty Boosh. But while Noel Fielding has managed to carve out some sort of post-Boosh life, Julian’s been a bit quieter. Until this movie which he co-wrote with Simon Farnaby and stars in. It’s a gentle spoof homage to the 70s slightly camp espionage/agent TV drama series like The New Avengers, The Six Million Dollar Man, you know the real action versions of Gerry Anderson’s stuff, updated with a bit of contemporary edge and banter.

Barratt’s Howard Moon in Boosh is a slightly fey character and Barratt acts the despair of forever having your dreams remain decisively out of reach to perfection. Yet the character Richard Thorncroft, an actor who made it big playing Mindhorn, here has lived the dream of celebrity and been chewed up and spat back out by it. There is nothing fey about Thorncroft, only bloatedness (both physical and moral) and, to be honest, I don’t think Barratt can play it. It’s hard to know if it’s in the writing, or down to Barratt’s performance, but it lurches to the caricature rather than the genuinely human. He wears a wig, he’s got a paunch, a past drug habit, a broken relationship and a child who may or may not be his, but which he is oblivious to. All pretty standard symbols of excess and it’s hard to invest them with anything fresh above the level of cartoon.

The film’s strongest pull is Farnaby’s character, who play’s Mindhorn’s stunt double with delicious over the top glee. In status terms, the two characters have changed places, Farnaby’s Clive seems to have it all, including Thorncroft’s ex (the female lead from Mindhorn) but, while a bit sleazy and cheesy, he is gloating but not bloated. Mind you, for some reason they have made Clive Dutch, which is both baffling given his very English name, plus the accent is clearly an English bloke doing a put-on Dutch accent.

The setting is where Mindhorn was filmed on The Isle Of Man, as a crazed fan who is accused of murder will only speak to Mindhorn the character, so Thorncroft has to step back into the role that he left behind and has left him behind many better years ago. It’s all very small town, involving crooked local politics and, in that way, recalls Pegg and Wright’s Hot Fuzz and The World’s End, but these benefit by the buddy element which Mindhorn lacks. Plus the jokes were better, I can’t really recall a laugh out loud moment in Mindhorn, except that provided in a cameo by Simon Callow. Steve Coogan is wasted here, Harriet Walter makes an appearance that isn’t really justified.

All in all it’s a bit of a mess. It just needed to be sharper.