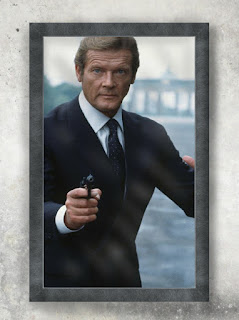 With news of the death of Roger Moore yesterday, a reminder of RJ Bayley's article from last year on why Roger Moore was the darkest Bond ...

Since his debut in the ultimate wants-to-have-its-cake-and-eat-it, ultra troublesome for Bond obsessives reboot, Casino Royale, Craig’s Bond has been in some of the most brutal fisticuffs of the franchise. He’s been noted for his aggression, viciousness and willingness to smash heads into urinals. He’s an emotionally complicated Bond; he fell in love with Vesper and her betrayal and his subsequent quest for vengeance spawned an emotion-driven odyssey that spanned the remainder of that film, Quantum of Solace, Spectre and, in a face-slapping piece of retconning that even Marvel would hesitate at doing, Skyfall. To go with it is the admirably stern overall tone of the films. They have no time for flying vehicles that come out of suitcases and horse bums. As such, he’s generally credited as being the darkest, coldest portrayal of Bond yet. He’s Hard Bond.

But I’m on the level. I’m a Bond purist. Bond is a huge influence on me and my life. I watch Bond on the reg. Legit bae. I knew, for a long time, that there was already a Hard Bond. And his name is Timothy Dalton. He’d been doing what Craig did 19 years previous, and he was doing it while looking like a sexy wolf. In License to Kill alone he literally exploded a man and later immolated his nemesis. It’s my second favourite Bond film for reasons like that.

However, after a long period of rotating who is my favourite James Bond, I eventually settled on Roger Moore. The one I, without any qualification or basis whatsoever, consider to be the Bond connoisseur’s Bond.

And yet, I uniformly like my fiction to be as gritty and violent as it can reasonably be. I like it grimdark. That’s a vast disparity between my wish for everything to be grimdark and the spy-fi humorous hijinks of the eyebrow raising Roger Moore, no?

While Connery, Lazenby, Dalton, Brosnan and Craig took killing to be a necessary part of the job or at most, grimly satisfying, Roger Moore’s Bond thinks it’s bloody hilarious.

Old Rodge The Smiling Lunatic (as I’ve come to know him) isn’t psychologically affected by taking away a human’s life. He doesn’t care who sees him do it or the effect one those who see it. No clothed shower crying for this spy. No. In fact Moore usually finds it delightfully amusing and an opportune moment to exercise his unpredictably successful wit. On the few occasions Moore didn’t find it amusing, it was because he found it amusing AND arousing. “Death for dinner, sex for breakfast” Miranda Frost quips to Bond, summarizing his take on The Game in the grossly underrated Die Another Day (come at me bro). Never has this been more true than with Moore’s 007, who, I imagine, eats a cigar for dinner and a martini glass for breakfast.

Take Moore’s most iconic outing The Spy Who Loved Me. While sleuthing around Egypt, back when Bond could be bothered to get off his arse and travel outside of Europe or America, 007 finds himself atop a building with villain Sandor dangling from his necktie. After giving Bond the information he needs, Moore doesn’t take him in, he slaps his tie away, sending him plunging to his doom, smashing onto the plaza below. Luckily the street below is empty, but Old Rodge doesn’t know that. Imagine the possible outcome. You’re out shopping at the bazaar. Perhaps you're a tourist looking to part with some money you don’t understand the denominations of over a mass produced sweatshop rug you don’t need. What colour shall you get? A vibrant azure with turquoise accents? Perhaps a regal puce with gold trim?

Ahh shit, decision made for you, now it’s red.

It’s all red. All the carpets are red. The stall is red. The floor is red. Your clothes are red. Your hair is red. Your skin is red. Everything is red. And now you’ve got to find public transport back to your hotel room, waiting in line at the taxi rank, then sitting in the hot, noisy metal box of the car, clad in your involuntary coating of a large man’s digestive tract. You burn your clothes in the bath of your room. You try to wash the gore from your skin, but it won’t come off. You can’t get the bits out of your eyes. Everything can only be seen through a red lens. You can’t get the pictures out of your head. That wide man, inappropriately dressed in a full suit, falling from the roof and smashing on top of someone else, instantly crushing the both of them between a bollard, piercing their abdomens and sending a spray of red everywhere. You try for three days alone in your room to stop seeing the images, but you can’t. You take your trusty pen knife, and you cut out your eyes. You wish you could remember where you put the towels you were going to use to plug up the holes, to stop your own red from leaking out of you, but you can’t. You crawl under your bedsheets and you die.

For Moore however, it’s time for sex.

In For Your Eyes Only, Moore has the option of easily bringing in a trapped, valuable criminal resource, Emile Locque; “OR” thinks Old Rodge, “I could casually step on the car he’s in until it falls off a cliff. Then it’s time for sex. This one who’s been following me around, she has been annoying. However, she is also emotionally crippled, psychologically scarred, grieving in the unhealthiest way AND pretty.”

Bear in mind this is the same movie in which Old Rodge The Smiling Lunatic starts proceedings by verbally bullying a severely disabled man with alopecia and mental health problems (he tries to bargain his way out of Old Rodge’s helicopter-flying grip by buying him “a delicatessen in stainless steel” - yes, it’s an in-joke, but it does exist in the narrative, so he’s definitely got mental health issues). Next Moore deliberately and smugly misinterprets his pleas for help as a request to be dropped down a chimney to his death. “That’s funny. I did carry out his request, but not as he expected. He’ll laugh about that,” he thinks, not fully able to differentiate between life and death. Then, as the opening credits play, Bond flies off for some sex.

And the truly frightening thing is, of all the Bonds, Moore’s is virtually unstoppable. Moore has literally slaughtered armies without a moment’s thought, or in some cases, need. He is a psycho-superman and thus capable of satisfying his whims to kill uninhibited.

Once he put a man with dwarfism in a suitcase before trapping him in a fishing basket on a ship’s mast. In the baking, blistering tropical Chinese sun. A ship that was sailing back to England. That man died from exposure, or starvation, or dehydration. It didn’t matter to Old Rodge. As soon as he hung Nick Nack from the mast, he forgot about him. But he did take the trouble to do it.

Moore’s is a darker, more interesting character than Craig’s Bond will ever be. Ask yourself, who is the more troubling, terrifying man? The one who sees killing as a serious but necessary business, or an unstoppable, almost-sixty year old pervert killing machine with a childish yet sexual attitude to death?