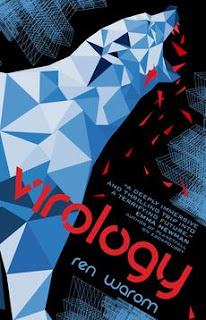 A year after the escape of Escapology, Titan Books announce the story's conclusion in Ren Warom's latest novel, Virology...

In the virtual world of the Slip Shock Pao is the best thief there is. A Haunt that can crack any system, steal any item – for a cost. But outside the Slip he’s a Fail – no degree, no job, and no affiliations to protect him from the many angry customers he’s built up over the years...

In the first instalment of the weird-punk series by Ren Warom – ESCAPOLOGY (Read Romeo Kennedy's review HERE) – Shock found himself faced with an offer he couldn’t refuse. Little did he realise his mission would turn out to be his most impossible, illegal, and illogical one yet. A mission that would see him cross paths with Twist Calhoun, one of the toughest crime lords in the Gung, and unwittingly release the colossal ant Hive Queens into the real world.

It’s been four weeks since Shock Pao broke open the virtual world of the Slip. With the stolen bio-ware Emblem in his head, he controls all the world’s systems, and so the shadiest characters in Foon Gung are desperate to track him down. Shock and the Hornets are running out of places to hide.

Meanwhile, the Patient Zeros – once people paid to transfer viral advertising directly into the Slip through biological downloads – grow sicker as the cryptic illness infecting them spreads. The source of the disease points to the distant hubs; Earth’s former cities snatched up and sent into orbit. With their pursuers nearing and time running out to find the cure, the hacker crew known as the Hornets flee skywards, from the insane underworld of Tokyo to the throngs of New York, all the time moving towards an evil that makes Hive Queens look like garden insects.

A sharp, slick and terrifying future shock story, VIROLOGY is the explosive pairing to ESCAPOLOGY concluding Warom’s highly original duology with a future world vision unlike any you’ve ever read: "a cult classic in the making."

Ren Warom lives in the West Midlands with her three children, innumerable cats, a very friendly corn snake, and far, far too many books. She haunts Twitter as @RenWarom, and can be found on her YouTube channel talking about mental health issues and, of course, books.

Virology is published on 13th June