Book - The Meaning of Liff 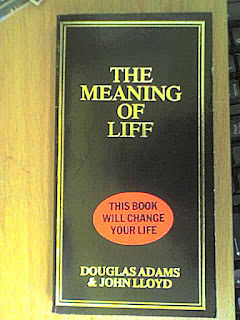 Susan Omand never could get the hang of Thursdays, so wrote about The Meaning of Liff instead...

We all know the answer, according to Douglas Adams, to the ultimate question of life, the universe and everything is 42. But what about the meaning of Liff?

Thankfully this cosmic conundrum is answered in another little book by Douglas Adams and John Lloyd called, coincidentally enough, The Meaning of Liff. Not only that but it also covers the meaning of Dorchester, Skegness and Corfu. Yes, the book is actually a list of place names that the pair have given alternative meanings to so that the words can "start earning their keep in everyday conversation and make a more positive contribution to society" rather than just languishing unheeded on signposts.

There are of course the placenames that sound funny anyway, like Goosnargh, Dipple and Mellon Udrigle, to which the addition of a humorous definition just adds to the effect but the book also covers the more commonplace... er... places like Plymouth, Hull and Exeter and the meanings assigned make them funny - because there is normally nothing funny about Exeter is there? Hull, for example, is that smell that you associate with a weekend cottage and to Plymouth is the act of telling a story to someone having forgotten it was them that told it to you first. And there's more than just English or British places in the list - a Corfu is that very dull person you meet on holiday who doesn't understand that exchanging addresses is "merely social ritual" and not an invitation to keep in touch, and we've all been Wyoming at some point on a night out as we search for the toilet cubicle that has the light that works AND a lock on the door. Handily, as well as the alphabetical list of place names, there is also an index of meanings at the back of the book so that you know that there is a word for the expression you pull in passport photos (Banff) or the person who always argues over dividing the restaurant bill because they only had the soup (Scranton).

In a time where typos make the news and it seems newly made up words are added to the dictionary (urban or otherwise) all the time, surely it is indeed time for the words we already have to work harder for their place in the language. Or am I just being a Kibblesworth*?

* In an interesting footnote, in the style of that other great book, The Hitchhiker's Guide to the Galaxy, the meaning of Kibblesworth seems to have changed in the time between the publication of The Meaning of Liff in 1983 and its expanded, and illustrated, 1992 counterpart, The Deeper Meaning of Liff. If that really is the case, how am I going to operate my digital watch now?