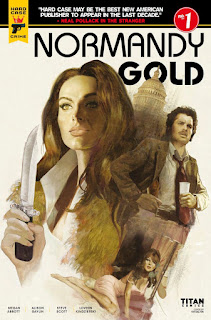 Susan Omand picks up her fedora and dons her flares as she reads Normandy Gold #1, out now from Titan Comics...

I love pulp fiction – I don’t mean the film, although it is good, I mean the trashy detective novels from back in the day that were printed on cheap pulp paper (hence the name) with sensationalist painted covers and were big on action and violence rather than deep emotional story-telling. Therefore I’m also a big fan of Hard Case crime novels, relaunched several years ago now by Titan Publishing, which seek to emulate the same feel, either by republishing stories from aficionados of the time, like Ed McBain, or picking up new work written in the same vein, like that from Max Allan Collins. So when the chance came to review a Hard Case Crime 70’s set pulp fiction comic from Titan Comics, I jumped at the chance!

​When her younger sister is found at the centre of a brutal murder case, tough-as-nails Sheriff Normandy Gold is forced to dive headfirst into the seedy world of 1970s prostitution.

What a fantastic start to a series! As far as my pulp fiction wishlist went, Normandy Gold ticked all the right boxes. Like all good detective tales, the story is told in voiceover from the point of view of the detective at the heart of the investigation and it was the story that grabbed me from the start. It never held back or pulled any punches as it built up the backstory of smalltown Oregon sheriff Normandy and her younger sister Lila while still keeping the action in the ever-seedier present going at full speed. The characters were all believable, staying just on the right side of cliché for some of the Washington cops, and it’s testament to the writing that I could hear the voices in my head without the dialogue sounding stilted or forced. This is especially true with Normandy herself who, I think, is going to build into a very impressive lead character in the series, making full use of the 70’s timeframe and despite the, very well portrayed in the story, inherent sexual prejudice of the time. In fact that was the one thing that didn’t quite ring true for me - that the detective from the DC precinct who got her out of jail actually didn’t question the fact she was a high ranking female law officer from Oregon. However, it was a very fleeting thought and certainly didn’t spoil the story for me. Indeed, if they had spent more time on the subject, it would have taken the focus off the case itself, so I’m actually pleased that it wasn’t made an issue. 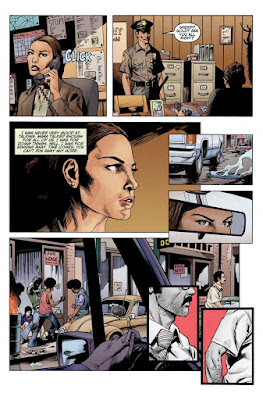 Going back to the 70’s setting, the artwork of the comic, by Steve Scott, is really incredible. The colours used in the comic itself, as well as the attention to period detail, really makes the story work in the grittiness of the era while still conveying that archetypal “trashy” pulp feel. There are also several variant covers to this first issue and some work better than others. My favourite, the one at the top of this article, is by Fay Dalton who has managed to mix a 70’s movie poster feel with the classic look of a pulp fiction cover.

For the first issue of a comics series, this has definitely done the job for me. It’s introduced engaging characters with great writing and amazing artwork, it’s set up an exciting long story arc without taking too long to do it and it has left the sheriff at a point where I really want to know what happens next. Normandy Gold #1 really has struck gold.

Available to buy now at titan-comics.com
Email ThisBlogThis!Share to TwitterShare to Facebook