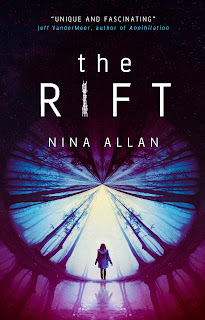 From Nina Allan, author of the critically acclaimed The Race, comes a story of family, identity and memory as Titan Books announce her new SF novel The Rift...

Selena and Julie are sisters. As children they were closest companions, but as they grow towards maturity, a rift develops between them.

There are greater rifts, however. Julie goes missing at the age of seventeen. It will be twenty years before Selena sees her again. When Julie reappears, she tells Selena an incredible story about how she has spent time on another planet. Selena has an impossible choice to make: does she dismiss her sister as a damaged person, the victim of delusions, or believe her, and risk her own sanity in the process? Is Julie really who she says she is, and if she isn’t, what does she have to gain by claiming her sister’s identity?

THE RIFT is a novel about the illusion we call reality, the memories shared between people and the places where those memories diverge, a story about what might happen when the assumptions we make about the world and our place in it are called into question.

Allan plays with form to create an intimate portrayal of the two sisters and is a powerful tale of loss, redemption and obsession; the universal themes of this beautiful literary SF novel will linger with the reader long after the last page.

Nina Allan’s debut novel THE RACE was shortlisted for the John W. Campbell Memorial Award, the BSFA Award and the Kitchies Red Tentacle. She has won the BSFA Award for Short Fiction, the Grand Prix de l’Imaginaire, and the Aeon Award. She has been shortlisted for the British Fantasy Award four times and was a finalist for the 2014 Shirley Jackson Award. She blogs at ninaallan.co.uk.

The Rift is published by Titan Books on 11th July.