Film - Scott Pilgrim vs The World 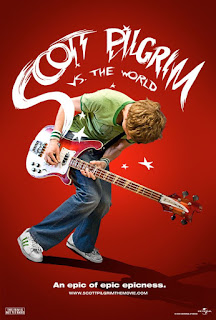 Scott Pilgrim vs The World is the centrepiece of the first event at EIFF Play tomorrow night. Susan Omand watched the film...

“An Edgar Wright film that doesn’t have Simon Pegg in it!”

That was my first thought as I read the back of the DVD box of Scott Pilgrim vs The World. You may know already of my dislike of Mr Pegg’s work (let’s face it, I haven’t exactly kept it quiet) and that has stopped me enjoying/tolerating/even watching the likes of The Three Flavours Cornetto films but, as Edgar Wright becomes one of the big director “names” with Baby Driver due to hit the screens later this month, the EIFF celebration of Wright’s work gave me an ideal excuse to watch one of the few non-Pegg related films he’s done and see what all the fuss is about. And yes, I will admit upfront, it really was my first ever watch of the 2010 film as Scott Pilgrim is one of those that I probably should have seen when it came out but didn’t quite get round to.

Well, I was won over immediately by the opening Universal ident before we got anywhere near the story itself – 8 bit graphics and beepy retro-gaming music, what’s not to like? And as for the story...

Let’s see if I get this straight. Captain America and The Atom are bad guys, two of the “seven evil exes” of Ramona with the pink/blue/green hair that Scott Pilgrim falls in love with while he’s also dating Kim from The Void, who is dressed as a Japanese schoolgirl. He’s also in a band where Maggie Jordan from The Newsroom is the drummer, after he got dumped by the new Captain Marvel so that she could sing in another band (with The Atom), and he shares a bed with Macauley Culkin’s brother and 2 or three others. Anyway, he has to fight these 7 evil exes Tekken stylee (Pilgrim’s progress?) to win over Ramona and live happily ever after in his snow-filled comicbook fantasy world of Toronto Canada. Maybe.

Look, it’s an Edgar Wright film, it’s not supposed to make sense. And it really didn’t matter, as I got caught up in the sheer geek-filled fun of it, spotting the knowing nods to retro games and comic books, the tiny touches like the 7 ex battles all having numbers hidden somewhere in the scenes, the levelling up/coin drop and the stereotypical gaming characters who could be almost exactly matched across to Street Fighter. The presentation of the whole film as a comic book worked very well, complete with written out sound effects (like when the phone rings) that were very reminiscent of the Zap Pow of 60’s Batman, and these additions really helped to add extra depth and character to what might otherwise be a fairly weak storyline – much like every other beat-em-up game in existence then. The film was obviously always meant to be tongue in cheek rather than taken seriously and the humour was laugh out loud funny in bits, especially with “Young Neil” the roadie/groupie/hanger on of the band. Kieran Culkin was also an absolute joy as room-mate Wallace and the whole film was a retro-pop culture lover’s masterpiece from start to finish.

So yes, Edgar Wright is cool and maybe deserves his place as a celebrated “almost indie” director and to be showcased at the Edinburgh Film Festival. I just wish they’d stop casting Simon Pegg in his films so that I could watch more of them.

Book tickets for Scott Pilgrim vs The World at EIFF Play here.