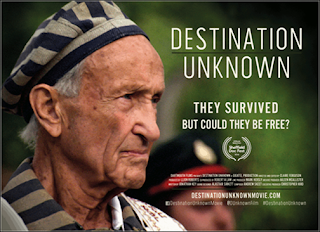 Destination Unknown tells the story of twelve Holocaust survivors, the price they paid for their survival and their lives after the war. It isn’t just a story of the camps. There are survivors who hid and survivors who resisted.

But, as with most stories of the Holocaust this isn’t just a story of survival. It’s a story of the dead too. Those who didn’t survive. Those who, in the words of one of the survivors on the steps at Mauthausen where concentration camp prisoners were marched carrying heavy rocks until they couldn’t carry any more, were not allowed to rest.

Each of the survivors carries the burden of their family that didn’t survive. Sometimes they question whether they did the right thing. The man who escaped the train but left his father behind asks himself whether his father might have survived had he stayed. The truth is probably not. The Nazis ruthlessly separated those too old or too young to be of any use to them and had them killed pretty much immediately.

As survivors, bystanders and perpetrators die and we are further away from the reality of the Holocaust, it becomes easier to deny it happened. This is despite being one of the most well-documented, industrialised mass murders in history – compare it with what information we have on the Armenian genocide for example. Holocaust denial is a denial of reality. And the reality was horrific. The reality was that survival was a miracle or a fluke depending on where you stand.

The stories of these twelve illustrate this. There’s a particularly moving moment at the end when Edward Mosberg is talking with his wife about her family in front of a wall filled with their sepia photographs. Mrs Mosberg wishes she was with them but Edward pushes her – in possibly the only moment in the film that made me feel uncomfortable – to talk about her lost family.

She survived. So did Marsha Kreuzman but she too is burdened with the guilt that comes with survival. They must ask themselves every day why did I survive? Why not my mother? My grandfather? What had I done to deserve this? And the answer to that last question is, of course, nothing. They had done nothing to deserve their treatment at the hands of the Nazis. The Holocaust wasn’t just about mass murder either. It was about humiliation too. It was about greed. It was about cruelty.

There are so many stories here. There is much sadness but moments of positivity too. When married couples are reunited. In the two-fingered gesture to the Nazis that their survival and their children and grand-children represents. They tried to wipe them off the face of the Earth but they failed.

If you know someone whose knowledge of the Holocaust is minimal this would make a fine film to introduce the topic. I can see it becoming a staple in schools and universities. Especially as it has an interview with Mietek Pemper, who helped Oskar Schindler compile his list. This connection to Spielberg’s film just emphasises the role that fiction has played in telling the stories of the Holocaust. Something that will become more important as time passes.

I recommend this film highly. It’s moving, intelligent, compassionate and fascinating. If you get a chance you should see it.