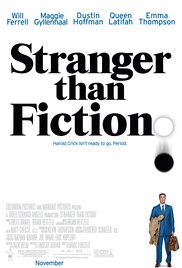 When Susan Omand starts writing articles with numbered lists in, you know she's annoyed about something...

When is a comedy not a comedy?

So why did I ever think that watching Stranger than Fiction, billed as a romantic comedy starring Will Ferrell and Emma Thompson was a good idea? Partly because Twitter friends have said it is very enjoyable and a must see (but, then again, remember The Goonies debacle,) and partly because the concept was a very intriguing one but mostly because I give things the benefit of the doubt by actually watching them before I pass comment.

Harold Crick (Will Ferrell) is a dour Chicago auditor for the Internal Revenue Service who is awakened alone each morning by his fancy watch, eats alone, counts the number of steps he walks for fun, focuses on ways to save time tying his tie, and brushes his teeth exactly 76 times (38 vertical strokes, 38 horizontal). One day, Harold begins to hear a voice that describes his thoughts and actions as if he were a character in a book...

So let's look at what WAS good about the film:

1. The concept. What a fantastic idea, having someone narrate and dictate someone else's life! The depth and profundity of that thought is mind boggling and could have made for a superb film had they run with the psychological/mental health aspect of it for both the book's character and the narrator. This could have been The Matrix does The Truman Show with a side order of Inception. There is so much scope for deep characters and meaty dialogue, the examination of power/paranoia and who truly controls their own destiny.

2. Dustin Hoffman. Let's face it, he's good in things. Even in bad films he plays good characters and was very believable as the literary English professor making his lists and asking questions from the point of view of working out the story rather than trying to help the character - such a wonderfully academic thing to do.

3. The effects. I loved the numbers! The visible counting of brush strokes or steps, the sums, graphs and spreadsheets. The nice touch that the numbers faced him, even though they were sometimes reversed to us. And the fact that, as his ordered life crumbled, so did they, with the lines skewing and numbers falling away.

And... well, that's kind of it for the good bits. So what went wrong?

1. The marketing. THIS IS NOT A COMEDY, PEOPLE!! I really can't see what so "hilarious" (a word actually used on the DVD cover) as I didn't laugh or even smirk once. In fact it's one of the most melancholy films I've watched for a while and could have been brilliantly heart-achingly beautiful had they run with the concept as I'd hoped they would and not ruined it with...

2. The cast. This is woeful (and not in a good way). Apart from Hoffman (and Queen Latifah who hardly figures at all) the casting and acting is awful. Will Ferrell is not believable as either the straitlaced taxman nor the romantic lead. His acting is one-dimensional and he just succeeds in looking cringingly uncomfortable in everything. He doesn't play it straight, nor does he play it for laughs, it's a phoned in performance at best. Emma Thompson on the other hand goes for "acting" in a big way. There is NOTHING subtle in her uber-angsty author as she stomps and declaims and generally behaves like a Shakespearean drama student... oh, wait. And this is one of the worst Maggie Gyllenhaal roles I think I have seen. She's like a bad Meg Ryan tribute act - lurching from smugly self-righteous to sugary sycophant in an empty inconsequential fluff-bucket of a character that they shoe-horned in there to give some "romantic interest." She's so much better than this role paints her to be.

3. *** SPOILER ALERT *** That ending! WHYYYYYY? Why didn't they leave it as the author/narrator originally wrote it or, at the very least, leave it as ambiguous - with the author walking into the professor's office with no word of the changed ending. Why does Hollywood always have to go with the happy ever after and tie up all the loose ends?!

There's one more thing that neither pleases nor displeases - rather it just confused me. The sentient wrist watch. Why does he have it? Where did it come from? What is its purpose and why do we never find out ANYTHING about it?

So yes, with a rewrite, recast and remake, this is a concept that bears a lot more exploration, just not like this. And to answer the question I posed at the start... When is a comedy not a comedy? When it's Stranger than Fiction.