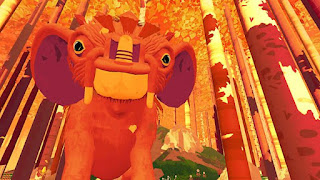 The BBC’s award-winning virtual reality fairy tale, The Turning Forest, is now available for free on the Oculus Store for Gear VR...

We covered this last year when it was only available as a launch title for Google Daydream, and now Samsung Gear VR users will now also be able to experience the enchantingly surreal VR story, as they enter a magical forest and embark on an extraordinary adventure with a fantastical creature.

The Turning Forest was produced by BBC Research & Development (R&D) in collaboration with virtual reality production studio, VRTOV. The new Gear VR version will enable viewers to trigger interactions by gaze, such as making music with the monster’s teeth, as well as the birds, fish, and icicles and other items that feature in the fantasy world.

It features an award-winning spatial soundtrack, which uses dynamic binaural audio to truly immerse viewers in this entrancing 360 degree world. The sound was adapted from an original soundtrack commissioned for S3A: Future Spatial Audio for an Immersive Listener Experience at home, funded by the Engineering and Physical Sciences Research Council.

Zillah Watson, BBC R&D, says: “The Turning Forest is a wonderful interactive VR experience, and we relish the opportunity to bring it to an even wider audience by launching it for the Samsung Gear VR. It was designed from the sound up, using state-of-the-art spatial audio to transport people into this entrancing realm.”

It will be followed in the coming weeks by historical VR film Easter Rising: Voice Of A Rebel, which will launch for the first time for free on the Oculus Store. The film has been produced by BBC Learning in collaboration with Crossover Labs and VRTOV, and will be available for both the Oculus Rift and the Gear VR.

Taking viewers back to the streets of 1916 Dublin, the film depicts the memories of 19 year-old Willie McNieve, a rebel who took part in the Easter Rising against the British. Through a unique and personal insight into this key moment in European history, Easter Rising: Voice Of A Rebel presents an artistic journey into the memory of an ordinary man who was swept up into an extraordinary event.

Zillah Watson says: “Easter Rising: Voice Of A Rebel is a fascinating account of a critical moment in Ireland’s history, told from a unique perspective. It shows that virtual reality can be used to give audiences a greater sense of presence, enabling them to better understand a range of issues like important current affairs, news, science and history.”