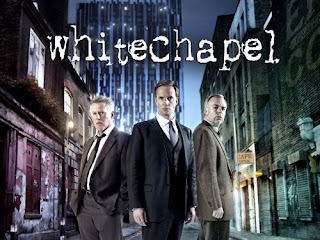 In a series of articles, Susan Omand and Steve Taylor-Bryant are going to remember the policemen, spies and criminal specialists that entertained them over the years. This time Steve heads for the east end of London and Whitechapel...

Bringing something classic or historical to the screen is not a new way of producing film or television, it may seem like that in recent years as everyone seems to have a take on history aspect to their show or film but it's not new. It wasn't new in 2009 when Whitechapel hit our screens either but with this show it at least felt that it had some form of originality to it. Bringing together quite a gritty police procedural alongside the fascinating brutal history of one of the worlds greatest cities was excellently done.

The historical aspects of all four seasons were just the kind of thing that I seek out in my documentaries or non fiction books and, whilst the Ratcliffe Highway murders that made up the first part of season three and the mixed stories of season four didn't have maybe the notoriety of Jack the Ripper or the Kray Twins of the first two seasons, they were still incredibly well written, cinematically beautiful and dark, with a well seasoned cast still on the top of their game.

The writing, especially of the first two seasons, Jack the Ripper and the Kray twins, by Ben Court (Primeval, The Hole) and his partner Caroline Ip brought their obvious love of the horrific and background in sublime storytelling to the fore, painstakingly researched to be as accurate as drama allows, the pair produced phenomenal scripts for a cast and crew to work from. The beauty on the screen comes from an almost satanic darkness and flickering editing that just unnerves you at every turn which meant whichever suspicion you had based on your own take on the history, you couldn't guess who did what because the route fear you were feeling. S. J. Clarkson's direction and the cinematography of Balazs Bolygo is some of the most remarkable ever seen on British television.

Which brings us to a cast that had to hit some real heights to make the background stuff work. I am a huge fan of Rupert Penry-Jones and honestly think he needs to be in more terrestrial shows. Spooks and Silk cemented him as a must watch actor, confident and skilled his trademarks as characters but in D.I. Chandler he had a weakness and inexperienced character to play and I bought into the portrayal immediately. He teamed up with a group of experienced and perhaps jaded detectives who all brought something to the story but no one brought more than Phil Davis as D.S. Miles. Davis should have national treasure status, he's highly watchable, ever reliable and the perfect foil for whoever he co stars with. In a gritty drama you can rely on Davis to bring the grit. To tie the historical to the modern world of policing you have Ripperologist Edward Buchan who is beautifully portrayed by League of Gentlemen alumni Steve Pemberton. I feel sorry for Pemberton sometimes as he always seem to be cast as the weirdo outsider but he's just so bloody good at it. He has an intellectual aura that you can't hide and in Whitechapel they used that to perfection. His insights, planning and lust for all the historical elements couldn't have been played by anyone else and it's to his credit that he makes everyone else uncastable in these types of role.

There has been great drama on British television before and since but rarely does a show offer such originality within a genre that constantly copies what's come before. Many fans lambasted ITV for not renewing the show for further series but, whilst there are still lots of gruesome London history that could make up new scripts, I'm of the opinion it ended when it should, whilst it was still good, relevant and original.