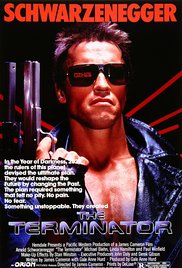 Our small band of Gunters here in The DreamCage universe are reviewing every film mentioned in Ernest Cline's Ready Player One. This week Susan Omand is back with The Terminator...

“In just 12 years time we will be rolling through ruined cities in Max Mad style cars, watching skulls being crushed under huge caterpillar tracked establishment vehicles and rebelling against our technological overlords at Skynet. That’s actually scarily close to the truth.”

With the future date in The Terminator set to 2029, that was my thought as I re-watched the opening sequence of the film. I will admit that T2 was a better film, and then the franchise just started getting silly, but I have a lot of love for the first film in the franchise, despite its failings.

And yes, it does have failings but it also has great successes. I realise that the effects in the Future scenes are ropey at best and, in the rest of the film they don’t get much better until you get to the T-800 itself. The Terminator effects, especially at the end after the big fire are incredible, especially for the era, and would give Ray Harryhausen a good run for his money. Also, and this might be quite controversial, Linda Hamilton is rubbish at doing the whole “damsel in distress” stereotype but she gets much better in the second film when she starts to show a much stronger character. And the whole “few moments” love story thing for her character with Kyle Reese is a cringeworthy plot-device in a solid, violent action movie. But I know they needed to underline the whole John Connor thing and make this essentially a prequel to a story that hadn’t yet been filmed.

One thing I absolutely can’t fault though is the casting of Arnold Schwarzenegger. He is perfect in the role with a huge physical and psychological presence that made the T-800 the force to be reckoned with that it should be. So he doesn’t get a lot of dialogue, so what? That actually works very much in his favour for his character to appear emotionless and menacing and contrasted well against the heightened fear/love/whatever going on between Sarah and Kyle. To be honest, I was quite disappointed when they made Schwarzenegger’s character one of the good guys in the second film, although Robert Patrick as the badguy T-1000 in T2 was immense!

The Terminator was also the film that also cemented James Cameron as being a “name” as a director. He’d worked on others before, notably learning a lot I think from John Carpenter on Escape From New York, but this was the film that let him break into the big time on his own. I do think though, he started on a high with Terminator, Rambo, Aliens et al but it really was Titanic that sunk his career as an action movie maker and he’s never quite recovered from it, which is why we need seven sequels to get Avatar right. That, however, is an argument for another time.

Anyway, on watching The Terminator back again, I’m very pleased that it was made at a time where not every comic book action film had to be “child friendly” and it fully deserved its 15 rating. The violence was brutal rather than cartoonish and the body count was high. I also really liked the fact that it didn’t over-Hollywoodise a happy ending but neither did they deliberately leave the film where it needed a sequel. Although the one they gave us was excellent.