Film - The Age of Adaline 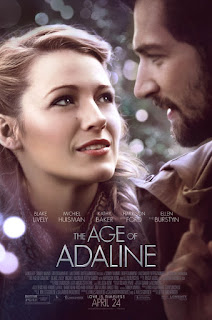 Steve Taylor-Bryant discovers that some plot twists never get old as he watches The Age of Adaline...

Some films have a science fiction twist to them and lose themselves in trying to explain the phenomena but The Age of Adaline is not one of those films.

Adaline Bowman (Blake Lively), a widowed single mother, crashes her car during a freak snow shower in 1937 California. Submerged in cold water, she passes away but is brought back to life after a lightning strike hits her water filled car. Adaline is now to spend forever aged just 29, unable to grow older. She spends nearly 80 years avoiding relationships, moving every 10 years to stop the authorities from questioning her and to prevent people from noticing that she is not gracefully getting older like they are. Her daughter, herself now a pensioner and considering a move to a retirement village, has missed her mother for most of her life and sees the loneliness on her young mum's face. She asks her mother to trust someone and to try and live a life. A chance encounter with philanthropist Ellis Jones (Michiel Huisman) leads to a weekend away at his parents house where Adaline's immortality raises its head after Ellis' father, William (Harrison Ford) recognises her has his first love from the 1960's. After a confrontation between Adaline and William, he wants her to tell Ellis the truth and not break his son's heart, Adaline flees only to crash her car in another freak Californian snowfall. Dead on the side of the road Adaline is finally at peace, until Ellis discovers the wreck and calls the emergency services. After being hit with the volts from a defibrillator Adaline is again saved and rushed to hospital. She decides to tell Ellis the truth and make a go of their relationship and introduces him to her daughter Flemming (Ellen Burstyn). A year later Adaline notices a grey hair and realises she is finally ageing.

The Age of Adaline is an extraordinary film full of heartfelt emotion, twists and, most of all, memorable performances from a cast perfectly suited to such a stunning story from Salvador Paskowitz and J. Mills Goodloe. Whilst the crux of the plot stems from the fact a meteor hit the moon causing strange weather which leads to the exact temperature a body must be when it dies to be brought back and not age, this is barely a science fiction film instead playing out loss, loneliness and death and the fear that comes from relationships. Blake Lively is convincing as Adaline and you can't help but be in awe of the way she works between the emotional corners her character finds herself in and carries a lot of the film all on her own, in a way that belies her relative inexperience in film appearance terms. The introduction of Ellis, ably performed by Eddie Vedder lookalike Michiel Huisman (honestly there was times during my second watch through for note taking that I started singing Jeremy,) adds intrigue to story and you end up rooting for them to get together. Harrison Ford, whilst not in much of the film, almost steals the show as William and the confrontation in the woods between Lively and Ford is as intense a scene as you'll see for a longtime. A short note for 'young' Harrison Ford, Anthony Ingruber, who really is a young Ford and shines in his few flashback appearances.

The Age of Adaline may not be marketed as a film for all but I implore you to search your streaming menus or grab a DVD as you won't regret watching a small masterpiece of cinema.