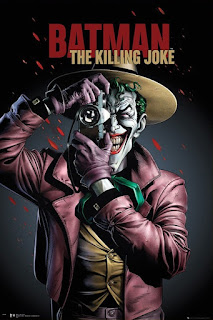 Surprising. That’s the one word best used to describe this film. It seems to represent what The Killing Joke is meant to be, although the thing is I had no idea what The Killing Joke comic/story was like when I watched it. But when it started and I heard the first ounce of vulgar language, I knew this wasn’t your average cartoon show. This obviously isn’t a bad thing as thinking it was a “cartoon” was what drew me away from watching it in the first place and I was both glad and surprised to see that this wasn’t the case. Mixed with the noir tone of the Joker’s flashbacks and sexual references, this is definitely not the kind of film a father should watch with his youngest son.

Now let’s talk about other aspects of the film that made it enjoyable (as I did very much enjoy this film). I could start with the fact that the film uses realistic camera angles, or the original voice actors for the main protagonists (Joker not included). The camera angles were very imaginative and not only showed clever perspective to make its audience forget that it’s even animated, but also brought the film to life for me by giving a viewpoint through what I would call three-dimensional camera angles, thereby making the characters seem more realistic because it felt more like a live-action film than an animation.

The voice actors were also creatively chosen, at least for me, as I did not recognise them and I could therefore buy into them as a character and their unrecognisable voice was helpful in preventing me from disregarding them as a character and only imagining them as an actor in the story. Of course the one exception for me is Mark Hamill. Don’t get me wrong, his performance in voice acting in this film was incredible, I only wish that I had heard his voice acting in Batman before I began watching Star Wars in around 2008 (yes, I was a bit late but oh well). This was really what drew me away from imagining him as the Joker though as I could only think of Hamill in a recording studio when I heard his voice as he is such a well-known actor and I had no idea who any of the other voice actors were.

Anyway let’s try to stay positive about this film because I really did enjoy it and I don’t want to bring across the wrong message about it. The fact that Batgirl was the main protagonist for the first part of the film seemed clever as this could help in inspiring more women and girls into reading into the comic book universe. We also got to see another side of Batman through Batgirl which was quite amazing. Of course, for my generation, Batman when he is simply Batman and not Bruce Wayne is a little two dimensional as he simply seems to be some scary bat wondering around fighting criminals and saving people. However, in The Killing Joke we get to see Batman as a friend to Batgirl and, for a brief time, a lover, so it seems like his second personality does have a heart…. 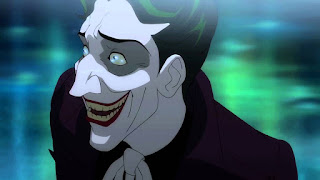 Now I do really want to talk some more about the Joker as a character, as the way he is portrayed is just astonishing. To me Heath Ledger did not seem like as much of a lunatic with a cause for his madness, perhaps that is the reason why so many people enjoyed his performance. Of course his actions were orchestrated perfectly in The Dark Knight and I have to give merit to Christopher Nolan for that aspect of the character. However, this Joker seemed to have a goal that is not to blow everything up that he saw and kill everyone and this interpretation seemed to keep the dark aspects of the Joker without having to continually show us a seemingly never-ending bloodlust. This Joker seemed to have an urge to make people realise what he realised a long time ago. This brings me to his backstory that is presented to us through flashbacks…

The use of flashbacks in the film was outstanding as I felt as if the use of the lack of colour seemed to have more than one reason to me as it felt as though it is not only used to let the audience distinguish between a flashback and modern events, but also emphasise the dark past of the Joker’s (I won’t mention what his backstory is in this film in case I have interested you enough to read the comic or watch the film if you haven’t already). I have waited a while to find out exactly how the Joker came to be without even realising it. It’s like when you’re trying to do something in real life, you keep trying to remind yourself to do it but stuff keeps getting in the way and making you forget about it. I think stuff is what stopped me from finding this out sooner, so in a way this film was my hero ( I know it sounds cheesy) for reminding me to find the interesting stories of unexplored characters through current films created by DC and Marvel.

Let’s have a quick old conversation on the music used in the film. I think this aspect of it is most significant when we see Batman with Batgirl and he references his past and we hear a darker tone of music play. I think it was just brilliant that they didn’t actually show us yet another version of Bruce Wayne see his parents killed as we have already been informed through the intro that this is not about Batman. Those who begin watching elements of the DC universe with this film would also be intrigued to watch the Batman films out of curiosity for Bruce Wayne’s past as the moment that this music is used gives the film an extra element of mystery, thereby further intriguing its viewers.

I believe that the only essential aspect of the film that I am yet to discuss is the final scene of the film so if you do not want the final sequence spoiled I advice that you stop reading now.

In the sequence we see the Joker tell Batman a joke that leads Batman to laugh almost manically (at least to me) which was just wonderful, as to end the film on such a dark event not only leaves the audience on edge, but also sums up the film in general. This is due to the fact that the title of the film is The Killing Joke; this leaves me wondering if this version of the Batman is hinted at dying at this moment in the film because it did end in a joke. This question is best left unanswered though as it leaves a moment to the audience to think about what they believe to have happened next (in the film version at least).

Overall I think that this film is incredible and I would defiantly recommend the film and/or the comic to anyone willing to be tempted into the dark story of the Joker and how Batgirl became Oracle, a genius yet paralysed computer girl with the continued intent on helping batman to stop criminals.