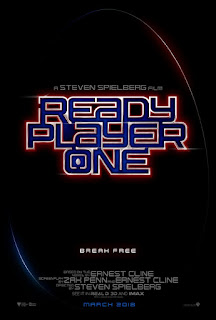 From all the trailers released over this weekend there's really only one we could pick for today on The DreamCage...

Was it Thor: Ragnarok? Hahahaha nope. Star Trek: Discovery? Nu-uh. Stranger Things then? No, but you're getting warmer. What about Justice League? Not that one either, although it came a very close second because DC, Batfleck and Aquaman!

No, since we've spent the last 75ish Thursdays reviewing films for #ProjectRPO (read all of them so far here and we've still got 29 Thursdays to go before we're done) I guess we'd better have a look at the trailer for the film Ready Player One don't you?

So, how many pop culture references can you spot in the trailer? So far we picked up:

The start of the song Pure Imagination from Willy Wonka
Harley Quinn and Death Stroke
Is that a floating Gandalf?
Of course the Iron Giant
Duke Nukem
Freddy Krueger
The amazing Tom Sawyer track from Rush
Lara Croft standing beside Christine the car
The A-Team Van and Mad Max's car!
The De-Lorean from Back to the Future
The motorbike from Akira (complete with an Atari logo!)

We know we've missed loads so let us know of more once you've watched the trailer below.