Steve Taylor-Bryant delves into the unknown as he breaks down twelve seasons of Supernatural into 12 Top 5 articles.  His top 5 from season 3…


Season three was another great season of television. There were some outstanding standalone stories as usual, and of course there is a season long story arc involving the Colt pistol, Lilith the oldest and first demon, help from a demon named Ruby, and Bella who is a thief, or “acquirer” of supernatural artefacts and a bit of a pain in the arse for the Winchester brothers. There is also the comedic Ghostbuster team, the Ghostfacers, who make an online paranormal reality show, and a favourite of mine in The Trickster. Considering the writers’ strike that affected most U.S. shows saw the season shrink from 22 to 16 episodes and with some shows the seasons were weaker for it, Supernatural managed to keep the story arc pretty much straight and packed in quite a lot. It’s not my favourite season, I’m not a fan of Lilith if I’m honest so the main story arc wasn’t my cup of tea, but the standalones and level of humour throughout the run was as good as it gets. So onto my top 5 and as always use the comments or Twitter to share your thoughts… 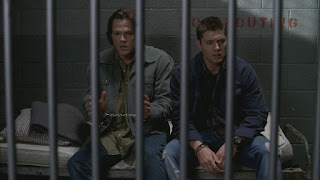 “Nobody kill any virgins!”

After being set up by Bella, Sam and dean are arrested and put into a cell in Monument, Colorado, awaiting transport to a maximum security facility. While there they discover a number of the authorities are possessed, and the jail itself is besieged by about 30 possessed townspeople. They are offered help by Ruby, but decide her solution is too costly, and devise their own way of escaping from the jail. 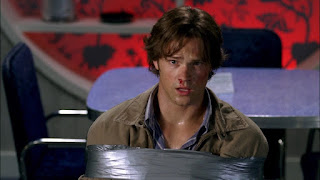 “You see, you touch it, you own it. You own it, sure, you get a run of good luck to beat the devil. But you lose it, that luck turns. It turns so bad that you're dead inside a week.”

During a prison visit, Gordon convinces the fanatically religious hunter Kubrick that Sam is evil and has opened the gates of hell and must die. While having an argument about the demon Ruby, Dean and Sam receive a phone call on their father's old cellular telling them that his container stored outside of Buffalo has been broken in. The Winchester brothers head to Buffalo and track down the small time thieves Grossman and his partner. Meanwhile the thugs open a box that they have stolen and find a rabbit foot inside. When Dean and Sam break into the apartment, they have a strange fight with the criminals and they note that the rabbit foot is a lucky charm that gives good luck to anyone that touches it. They call Bobby who tells them that that the foot has been 'voodoo' prepared by a witch in Baton Rouge. Although it gives good luck and fortune to the owner, if lost, the owner dies within a week. Sam and Dean decide to destroy the magic object, but they discover that they have been stolen by the greedy mercenary Bela Talbot. While Dean seeks out Bela in Queens, New York, the jinxed Sam is chased by Kubrick and his friend Creedy.

“I'll tell you one thing - there's no way I'm kissing a damn frog.”

When the Winchester brothers read about a psychotic killer in Maple Springs, New York, seemingly killing in the lunar cycle, they head to the city expecting to find a werewolf. They interview the survivor who tells them that his two brothers were killed by a violent man acting like a wolf. While they are interviewing Dr. Garrison, another victim arrives in the hospital: Julie Watson was tracking with her husband Ken and they get lost in the woods. They are welcomed by a gentle old woman in her isolated house that out of the blue rips Ken with a knife. Julie sees also an eight year old girl in the window. Sam associates the murders to the "Three Little Pigs" and "Hansel and Gretel" fairy tales and sooner they try to save the victims of "Cinderella" and "Little Red Riding Hood". Further, they discover that the one responsible for the deaths is a victim of "Snow White's" fairy tale, expecting her father to listen to her about her stepmother. When they resolve the case, Sam decides to meet the Crossroad Demon to force her to keep Dean out of the deal threatening with the Colt. 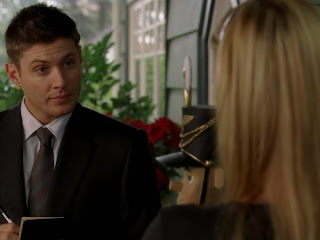 “Sam Winchester: Think about it, Dean. If you smell like candy, the kids will come closer, you know?
Dean Winchester: That's creepy.”

Santa's been naughty this year. Reports of family members getting dragged up the chimney call the Winchester's attention to Michigan, where they try to determine if Santa really does exist, which would allow for the possibility of an Anti-Santa. Meanwhile, Dean decides he wants to celebrate a Hallmark Christmas this year since it's going to be his last, though Sam is very resistant. 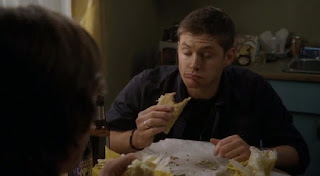 “Of course, I peed myself. Man gets hit by a car, you think he had full control of his bladder? Come on!”

When Sam and Dean investigate the disappearance of a man who was looking into a tourist attraction known as "The Mystery Spot" -- where the laws of physics don't apply -- Sam is thrown into a repeating loop, living the same day over and over, and watching Dean die each time in a different way as Sam avoids the method that killed him the last time.