Book - The Labyrinth of Death 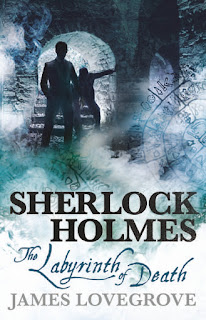 The game's afoot, or is it a maze, as Tony Cross loses himself in Sherlock Holmes: The Labyrinth of Death by James Lovegrove, thanks to Titan Books...

The Labyrinth of Death is the third Sherlock Holmes novel from Titan Books I’ve read recently and it is by far the best, but I still think Holmes works best in short form.

However, this is a fine read. It does feel a little like an idea for a screenplay that’s been turned into a novel but that’s not necessarily to its detriment.

Holmes and Watson are called upon to investigate the disappearance of Hannah Woolfson, the daughter of a judge. In the process of this investigation they discover that Miss Woolfson herself is investigating the disappearance of her friend, Sophia. Miss Woolfson has gone undercover as a member of the Elysians. The Elysians are a cult obsessed by Ancient Greece run by Sir Philip Buchanan. Buchanan is a man with ideas. And men with ideas are always dangerous.

The structure of this book is rather interesting. The first chunk is almost a standard short Holmes adventure as they search for and find Miss Woolfson. The second chunk feels similar too ‘The Hound of the Baskervilles’ with Miss Woolfson playing the part of Watson. And finally, it all goes a bit Indiana Jones (which isn’t necessarily a criticism.)

Watson gets to play the fretting romantic as he falls for Miss Woolfson and his frustrations at Holmes’s willingness to let her remain at risk is rather entertaining. Holmes feels like Holmes here, which is good. And Watson feels like Watson who, I fear, is the kind of man that falls in love at the drop of the ash of a Trichinopoly cigar. Miss Woolfson is also a fine character and if I had any advice to give to Mr. Lovegrove and Titan Books it would be that perhaps a series of the adventures of Miss Woolfson, Lady Detective would be much appreciated.

So, this does a fine job of feeling like a Sherlock Holmes novel. I’m not sure the language is entirely spot on. Sir Philip’s motivations and hopes are not a million miles away from some of the real people who governed Britain in the nineteenth century, just a little florid perhaps. He is one of those characters that feels the end justifies the means and he isn’t the worst character in the story by a long chalk.

Titan seem to have set up a specialist line of Sherlock Holmes novels and as I’ve said in my previous reviews I’m not sure Holmes suits the novel. I re-read ‘A Study in Scarlet’ this week and once more I found the scenes in Utah slightly tedious compared to the rest of the story. And writing novels about Holmes requires the writer to find something interesting to do and say when Holmes isn’t being clever and Watson isn’t being staunch. The Labyrinth of Death is the nearest we’ve come to getting it right so far. The structure helps immensely as does Miss Woolfson.

So, I can recommend this one.

And please can we have more of Miss Woolfson.