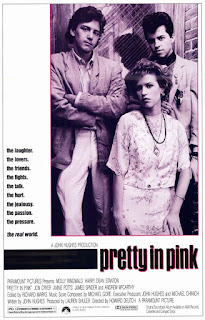 Our small band of Gunters here in The DreamCage universe are reviewing every film mentioned in Ernest Cline's Ready Player One. This week, Steve Taylor-Bryant is Pretty in Pink...

I'm more than likely going to upset a few folk here at the office, and more than likely most of you my dear readers (and Mum), but Pretty in Pink isn't as great as you think it is. There I've said it. We all, myself included, hold John Hughes in this high esteem, and rightly so, as the man single handedly tapped into our lives going through the hell that was school but, on occasion, even our film god got it wrong. Pretty in Pink is that film, although to be fair most of my problems with it lie at the door of Paula Herold and Marci Liroff who were in charge of some of the worst casting decisions in Hollywood history, but I'll get to them later.

Pretty in Pink is just too familiar, I can't believe I dare say this but I believe it's John Hughes being lazy and borrowing far too much of what he had done before. "The poor girl falls in love with the rich guy whilst quirky outsiders look on" was age old before Hughes got his hands on the idea and most of the time Hughes made the simplicity of the plot work with cracking dialogue and a fantastic cast. With Pretty in Pink, the story isn't supported with either of these, it seems rushed and not thought through by a usually peerless writer who has thrown together some gags and handed a story to a studio that just didn't know how to make something different. Hughes will always be admired by me, but not for Pretty in Pink. Saying that, if the casting had been better it could have worked.

So to the cast. Everyone in this film is wrong for their part with the exception of Molly Ringwald, so let's agree she was great and move on. I like Andrew McCarthy as an actor, he's always a safe choice and, as Blane, he is also safe but he shouldn't have been. He should have been as risky a choice as the one Andie was making by falling in love with him. He was almost too sensitive, too likeable and, at 24ish, too old to play a high school kid with that much nicety. I just didn't buy into him and considering he was the point of the film, the rich 'kid' that Andie falls for, it now just doesn't work and just feels awkward, which leads me to James Spader as Steff. I love James Spader, he plays sinister and broken better than most actors but I'm pretty sure as Steff he was supposed to be more spurned lover and uber brat and less creepy uncle which is what his portrayal comes across like. Write the character as creepy uncle, the kind of 'man' you don't want near children and Spader nails it, but it wasn't written like that was it? Now it's just uncomfortable to watch. The rest of the friends and cast of characters are okay, nothing above good, Harry Dean Stanton is better than this and so I'm calling it a small blip in his usually perfect film roles, which means we have one last character that needs a mention; Duckie.

What in the actual *#*¥ is he? Weirdo? Friend? Comedic sidekick? Someone to wear crappy wardrobe mistakes that a producer had paid for? I normally like Jon Cryer, he's not maybe as big of a star as his talent warrants but usually if Cryer is in something you going to be entertained in some way. However, in Pretty in Pink they have tried to make a quirky friend and instead have thrown every cliched non-jock role into one huge mess. It's such a bad character that if you remade it today you'd have cast Adam Sandler. Honestly, it's Adam Sandler as a Native American Apache bad.

Everyone loves Pretty in Pink, mainly because we as a generation are scared to question or criticise John Hughes, but you can't let anyone get away with a travesty, no matter how much affection you have for them.