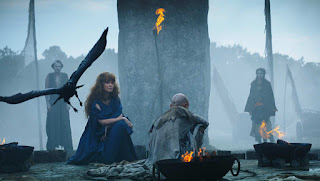 Looking for something to fill that Game of Thrones shaped hole in your viewing in 2018? Watch the first-look trailer for Britannia, coming to Sky Atlantic early next year...

Set in 43AD, when Britannia was a country ruled by powerful Druids and warrior queens, it follows the reluctant rise to power of Kerra, the daughter of the King of the Cantii. When the Romans invade Britannia, she and her arch-rival Queen Antedia are forced to put their differences aside to face their invaders. Meanwhile, rogue Druid Divis, the only one who foresaw the Roman invasion, finds an unlikely ally in 12-year-old Cantii girl Cait in his quest to defeat Rome. The Romans are led by General Aulus Plautius, who is determined to succeed where Julius Caesar failed and conquer this mythical land at the far edge of the Roman Empire. He is a strong and resilient leader, however, he is harbouring a deep secret. During the series, he will have to take on the dangerous Celts, hold together his fearful and reluctant army, and confront his own personal demons. As tribes and Druids unite to fight the Romans, Kerra is thrust into the most important role of her life as she spearheads the resistance against the might of the Roman army.


Mackenzie Crook (Pirates of the Caribbean) plays Veran, the leader of the Druids, feared and respected in equal measure - he answers to no one but himself and the gods.  Written by multi-award-winning Jez Butterworth (Spectre), the show also stars Kelly Reilly (True Detective) as fearless Celtic princess Kerra, David Morrissey (The Walking Dead) as the head of the invading Roman army, Aulus, Nikolaj Lie Kaas (The Killing) as rogue Druid Divis, and Zoë Wanamaker (Harry Potter and the Philosopher’s Stone) as Celtic Queen Antedia.

The trailer gives an intriguing glimpse at the show, people and relationships at its centre, as it takes a journey to a place where mystical Druids run free, invincible Celts reign unopposed and invading Romans try to bring them into line. And a Donovan earworm with Hurdy Gurdy Man.