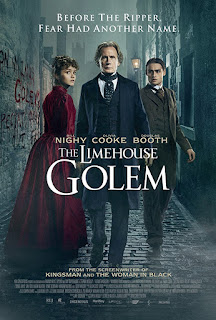 Ren Zelen heads to Victorian London's east end (and the cinema) to investigate The Limehouse Golem...

The Limehouse Golem is an adaptation of Peter Ackroyd’s 1994 novel “Dan Leno and the Limehouse Golem” (in the U.S. “The Trial of Elizabeth Cree”) and is the first English-language feature of director Juan Carlos Medina (after 2012’s Insensibles). It’s a detective tale which utilizes a mixture of fictional characters and actual historical figures. The story revolves around a double criminal investigation – the poisoning of a husband, and a spate of grisly serial murders in the London of the 1880s.

Disillusioned journalist-turned-failed playwright, John Cree (Sam Reid) is found dead in his bed. Suspicion falls upon his unhappy wife Elizabeth (Olivia Cooke), a former star of the music halls, much celebrated and beloved, and known as ‘Little Lizzie’.

Aveline (Maria Valverde), a jealous rival of Elizabeth’s, attests to the Cree marriage being stormy and to Elizabeth habitually preparing a sleeping draught for her husband, which, on the night of his death, may have included a dangerous additive, although Elizabeth maintains that Cree’s death was a suicide.

Meanwhile, John Kildare (Bill Nighy, replacing the late Alan Rickman, to whom the film is dedicated) — a Detective Inspector for Scotland Yard whose career has been hampered by vague rumours of homosexuality — is put on the high-profile case of the serial killer called the ‘Limehouse Golem’ (so named after a rough district of London). He is there to deflect attention from his colleagues who fear the harm that bad publicity may do to their own career trajectories, as they have so far failed to ascertain any clues as to the vicious killer’s identity with which to placate an increasingly nervous public.

As Kildare doggedly proceeds in his investigations alongside sympathetic local, Constable Flood (Daniel Mays), he begins to realise that there may be a connection between the two cases. 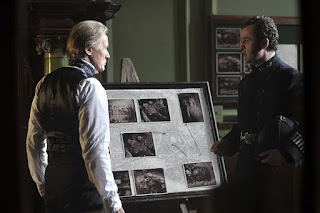 The dead husband John Cree begins to emerge as a suspect in the gruesome Limehouse Golem murders, his possible ‘suicide’ may appear an admission of guilt. Kildare’s inquiries lead him to a music hall run by the (real-life) music hall comedy cross-dresser, Dan Leno (Douglas Booth).

Kildare pieces together the Golem’s horrific acts. These appear to have no connection - streetwalkers, a Talmudic scholar and an entire family household have been slaughtered in turn. Soon Dan Leno himself, as well as two other actual historical figures - expatriate political theorist Karl Marx (Henry Goodman) and English novelist and social activist, George Gissing (Morgan Watkins) - join the list of Kildare’s suspects. The inspector pictures each of these men perpetrating the crimes as the Limehouse Golem killer.

Kildare develops a sympathy for the imprisoned Mrs. Cree, who he believes to be innocent of the murder of her husband. When he hears of the dreadful poverty and horrific abuse she suffered as a child his sympathy turns to admiration for her difficult climb to success and respectability.

As an orphan, she petitioned Dan Leno to work at his music-hall as a dogsbody, in time becoming a favourite amongst the actors and a stage star herself. Kildare feels disgust at how she is now being painted by the press as a scheming and murderous femme fatale.

I must confess to being a fan of classic detective stories, so I was likely to enjoy this particular kind of yarn. However, attempting to outline of a plot so packed with incident, storylines, flash-backs and red-herrings, without giving too much away, is challenging. The plot hurtles forward, trying to squeeze in a plethora of detail and exposition into a two-hour slot, and again Jane Goldman’s screenplay feels like a hasty condensation, rather than a fitting interpretation of Ackroyd’s novel.

Not having the leisure of a TV mini-series in which to unfold, the characterizations here are rendered in broad strokes, saved by the skill of a committed cast. Nighy is engaging as ever, and Eddie Marsen’s plays the music hall manager, nicknamed ‘uncle’, with wry ambiguousness. Douglas Booth makes use of his androgynous looks as the cross-dressing music-hall star Leno, and his character provides a unifying thread throughout the film. But the plot predominantly revolves around Olivia Cooke in the predominant character, Elizabeth Cree.

Cooke uses the opportunity to show off her range (and her singing voice) in a demanding role, while director Juan Carlos Medina just about succeeds in holding together the many moving parts around her.

The film is visually arresting - Medina and his team making a limited budget go a long way and giving us a glimpse of the dark, grimy streets of Victorian London. We have shadowy scenes of night-time Limehouse, with its dirty docks, gin palaces and music halls. By contrast, the interiors are bathed in a subdued golden light and dressed in velvet, brocades and faded, flock wallpaper.

The Limehouse Golem’s 105-minute running time races by pretty speedily, although possibly the onslaught of an overwrought plot might leave some viewers stunned into submission. For an old hand like me, the whole thing just about managed to work and remain entertaining, (apart from trying to ignore my annoying habit of guessing the conclusion halfway into the film, but that’s the price one pays for studying all of Conan Doyle’s works).