Book – To Kill the President 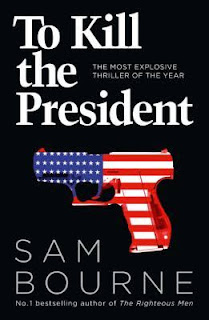 Steve Taylor-Bryant takes on a political thriller from Sam Bourne as he reads To Kill the President out now from Harper Collins...

Maggie Costello uncovers an assassination plot to kill the tyrannical new president. If a president is out of control who will take the ultimate step?

The unthinkable has happened. The United States has elected a volatile demagogue as president, backed by his ruthless chief strategist, Crawford Mac’ McNamara.

When a war of words with the North Korean regime spirals out of control and the President comes perilously close to launching a nuclear attack, it's clear someone has to act, or the world will be reduced to ashes.

Soon Maggie Costello, a seasoned Washington operator and avowed liberal, discovers an inside plot to kill the president and faces the ultimate moral dilemma. Should she save the president and leave the free world at the mercy of an increasingly crazed would-be tyrant or commit treason against her Commander in Chief and risk plunging the country into a civil war?

I like journalist Jonathan Freedland. His columns in British newspapers are entertaining and informative, something in short supply with our media, and his book The 3rd Woman was quite an enjoyable read although it took a while to get going. No such problems with his pseudonym, Sam Bourne’s, novel To Kill the President. The levels on which this book work for the reader are quite astonishing. There is a taut thriller at play that, whilst it may not be flawless, is certainly as interesting as anything written by Dan Brown or Brad Meltzer, both authors whose work I really admire when they get into the American politics side of things. With the majority of the book's story playing out in a five day timeline its pace is relentless. You can’t help but get wrapped up in the goings on, whether it be the initial plan to remove the president or the events that happen to Maggie after her discovery. The rush to keep up and get to the end is hard to resist so resist I didn’t, finishing the book in a matter of hours. The investigative side, the action, the narrative, the timeline, all top thriller fare and the book would work and be a great read even without the other levels but it’s the background of Washington’s fictional government and the nods to a real past that please most.

It is most definitely a Trump inspired set up, the first few chapters and character descriptions of the president's main advisor, Crawford ‘Mac’ McNamara, the daughter with all the power, and the hidden alt-right conversations between some of the main players, Mac and Maggie’s ‘boyfriend’ in particular, leave you convinced you are reading a Steve Bannon biography at some points and the description of the president's mood and reactions in the initial set up for the novel have sprung through most sane people’s minds in the last twelve months. The, and I can’t believe I’m writing this, reality of our world politically and the American government's actions thus far ground what would have been an outlandish story three years ago in a recognisable, albeit horrific, state and it’s that fear we all feel about the state and future of the world that underpins the thriller and adds an edge to the narrative that just grips. The real life uses of political history and nods are just as pleasing from the use of McNamara as a name to the entire ‘Rosemary’ ending Bourne has got every part of his book right.

This is not classic fiction, the type you might study at university but, considering the political climate at the moment, it is a blessed release of anxiety reading To Kill the President. Gripping, entertaining, smart, modern, frightening and real. A top notch book from a top notch writer.