Book - The Age of Olympus 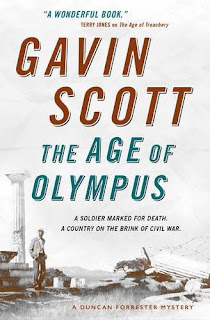 Tony Cross reads the second Duncan Forrester adventure from Gavin Scott but does the Age of Olympus "peak" his interest or is it a Greek Tragedy?...

The Age of Olympus is the second in Gavin Scott’s Duncan Forrester series [read Steve's review of the first book here] and it is rather good. It doesn’t push many envelopes but it does what it sets out to do rather well. It reminded me a little of John Buchan’s work (but without the racism and homophobia), although it relies less on coincidences and luck.

Duncan Forrester is an ex-SOE agent and archaeologist. He was, fictionally, part of the operation to kidnap General Kreipe on Crete. You probably know that story as it was made into a film in 1957 starring Dirk Bogarde, ‘Ill Met By Moonlight’.

Forrester has returned to Greece to find a statue he stumbled across during their attempts to evade the Germans post-Kreipe’s kidnap. However, he turns out to get caught up in a whole other conspiracy after a Greek poet, Jason Michaelaides, dies at a party and there’s a suspicion that the poet wasn’t the target. After all, who kills poets? The rest of the book tells the story of the quest to find both statue and murderer.

Forrester’s role in that allows Scott to weave real people in and out of his narrative: Patrick Leigh Fermor and Lawrence Durrell to name but two. It also weaves real events into the story. In this case the impending post-war Greek Civil War, which we in Britain have forgotten even though we were to get heavily involved trying to prevent the communist ELAS from winning. It’s worth reading up on. Especially if you have romantic views about Winston Churchill.

Gavin Scott is a screenwriter by trade and this has the feel of a book in search of a film deal, which isn’t a bad thing as it helps the novel roll along at a fine pace. It never gets boring, which is the cardinal sin in any art for me. Even the moments where it stops to take a breath we get to know more about the characters or the setting. It’s like someone got hold of Dan Brown and taught him that exposition and ‘look at all the research I’ve done’ are not the same thing.

The characters feel like real human beings doing interesting things and not everything is as obvious or as straight-forward as it looks. Forrester himself is a believable character, even if the initial character description makes you think he’s a British Indiana Jones (which as Gavin Scott worked on ‘Young Indiana Jones’ isn’t an unlikely influence.) He’s got depth and he doesn’t always get what he wants.

There’s twists and turns most of which I didn’t see coming, which always a joy. This is the second book in the Forrester series and I hadn’t read the first one, which is something I intend to put right and I look forward to reading the third.

So, if you’re looking for a good adventure story with a little depth then I’d say you can’t go far wrong with this. And if you don’t want to go and watch ‘Ill Met By Moonlight’ when you’re done I’ll be extremely surprised. Also, I wouldn’t be surprised if this series turns up on a television or cinema screen near you at some point.