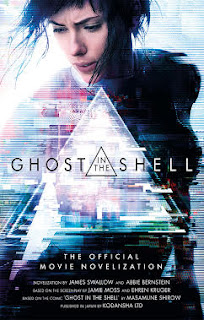 Titan Books announce the publication next week of the official movie novelisation for Ghost in the Shell, written by James Swallow and Abbie Bernstein...

In a near future metropolis dominated by technology an elite task force named Section 9 are devoted to stopping the most dangerous criminals and extremists. Their leader is The Major: a special ops, one-of-a-kind human-cyborg hybrid: A human saved from a terrible crash, who is cyber-enhanced to be a perfect soldier devoted to stopping the world’s most dangerous criminals.

When a hacker emerges, whose singular goal is to wipe out Hanka Robotic’s advancements in cyber technology, Section 9 will face their greatest enemy yet.

Based on the internationally acclaimed property Ghost in the Shell, a quintessential science-fiction classic, fans of the live action movie can relive the experience in this exciting new official movie novelization which is published on 26th September.

ABOUT THE AUTHORS: James Swallow is the New York Times bestselling author of more than thirty-five books, including fiction from the worlds of Star Trek, Doctor Who, and more. His other credits feature scripts for videogames and radio drama, including Deus Ex: Human Revolution, Fable: The Journey, Battlestar Galactica, and Killzone 2. A BAFTA nominee, James lives in London. Abbie Bernstein is the author of The Art of Mad Max: Fury Road, The Art and Making of The Flash, The Guild: The Official Companion, and The Cabin in the Woods: Official Visual Companion. As well as also working on Much Ado About Nothing: The Official Screenplay, Abbie writes regularly for magazines, including Assignment X, Fangoria, and Buzzy Mag.

ABOUT GHOST IN THE SHELL: Directed by Rupert Sanders, Ghost in the Shell stars Scarlett Johansson as Major in the film now on Blu-Ray, 4K Ultra HD and Digital HD. Based on the famous Kodansha Comics manga series written and illustrated by Shirow Masamune, the film’s screenplay is by Jamie Moss and William Wheeler and Ehren Kruger.