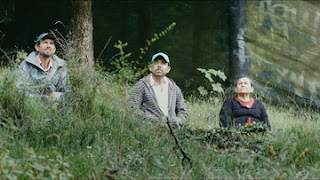 Part of this year’s Raindance Film Festival, Steve Taylor-Bryant watches a documentary about what it’s like to live in today’s America from both sides of the Mexican border...

Laura Plancarte’s second feature length documentary is one that provokes both thought and emotion. Siblings is a tough watch, but a beneficial one as I hope you will see come the end of my review. From the press release is the following synopsis:

Siblings tells in parallel the story of two Mexican brothers that want to go back to the US after being deported for life, with the story of an American woman who lost her house and today believes she can get it back through Trump’s promises.

Their journeys take them on road trips to meet with their past and with relatives who they believe can help them achieve their dreams. Immigration has been shown in many ways, but it has never been presented through the lives of Mexicans and Americans who live similar situations due to poverty and lack of family structure.

Personally I don’t think the synopsis does the film justice, as I truly believe what Plancante has done is produce something a lot more complex than advertised. Maybe an audience wouldn’t watch something this deep if they knew in advance what was going on, I don’t know, it’s probably why I don’t work in Public Relations, but the complexities of Plancarte’s film are its gift to the audience.

It’s very easy to make a film from a political point of view and skew the narrative to fit an ideology and, I’ll be honest, I expected some kind of political message from the documentary purely because I haven’t seen many that aren’t trying to spread some kind of agenda. However Siblings is one of the very few that covers all sides of a difficult argument very well and leaves the audience to make up their own mind as there is no answer yet. The stories from both sides of the border are as heart-breaking as they are real and are a great snapshot of what real life is like in a country divided like never before.

The synopsis leads you to believe this film is about immigration and, whilst that plays a large part of the story, its complexities are in the effects of everyday life and how they happen to both the immigrant and the native. Health care, earnings, housing, law and policing, all rear their ugly head throughout the film and the astonishing reactions of different people to these emotive subjects are sometimes hard to watch. A Trump supporter, now poor after an abusive marriage breaks down, is pinning all her hopes on an abuser and a racist gaining power like a deluded soul. Completely seduced by his rhetoric and campaign promises, even her life falling to poverty doesn’t make her see things differently and, whilst I have no strong opinions on immigration myself, I find racism and blaming migrants is a very strange reaction. On the Mexican side of the stories there is poverty and family issues but there is also a fair share of delusion. The insistence that crossing the border will bring about The American Dream is naïve and I can’t understand that mind-set, but then I am a lower middle class white British man, so maybe I am not supposed to.

Siblings has opened my eyes to events that I only see snapshots of on the news. It has put real faces on real problems and allowed me a glimpse of a life that I really hope I never experience. I know a lot of people will want an answer to a problem, they like their documentaries all wrapped up in a big bow. You won’t find that here, all you’ll find is both sides of an argument played out so the viewer can learn a little more of what a tough life some lead. Even if the subject matter of Siblings is not to your taste then I suggest you watch just to see Laura Placante stretching her artistic muscles and growing as filmmaker as she has hit the ground running with this one and has produced some evocative work.

Siblings will screen at Raindance Film Festival, at the Vue West End (Leicester Square), on Monday 25th September at 21:00 and on Wednesday 27th September at 13:30pm. Buy tickets at http://calendar.raindancefestival.org/films/siblings