Book – Ten Days in a Mad-House 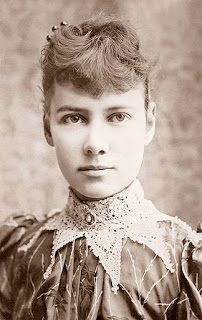 Deborah Taylor-Bryant took on a 19th century exposé into the treatment of patients at the Blackwell’s Island asylum as she read the book by Nellie Bly...

I came across this book on Amazon and, no sooner had I ordered it, than it was mentioned on an episode of the West Wing! The First Lady, Abbey Bartlet, was commenting that Nellie Bly, amongst other important and underrated women, deserved more of a mention in American history and I can't agree more, so I was excited to start a book compiled by one of these women more deserving of their place in history and read about a subject matter dear to my heart; mental health.

Nellie Bly, real name Elizabeth Cochran Seaman, then working as an investigative journalist, wanted to highlight issues of care within the system that treats the mentally ill and set about, with her editor’s approval, getting committed to the Women’s Lunatic Asylum on Blackwell Island in 1887. After convincing those she needed to, she was admitted and immediately dropped the act she was portraying, hoping to gather some information and then get released. No one cared, leaving Bly to just hope that after ten days her editor would get her released.

Whilst inside the facility, Bly was witness to horrendous treatment of the ‘inmates’ because these unfortunate souls were not being treated as any kind of patient. Treatment including regular beatings by the nurses, especially if you had had the audacity to complain, no decent drinking water, very little, and very poor quality, food and not enough heating or blankets. These were the forgotten women and were treated so. Eventually Bly was released, after the newspaper sent a lawyer to get her out, and her notes from her odyssey were published as a series of newspaper articles for New York World, before later being compiled into a book, Ten Days in a Mad-House, published by Ian L. Munro.

Not enough credit is given to this journalist for her bravery in the face of personal risk and the extraordinary writing that opened up the world’s eyes to how we view and treat mental health. Bly single handedly exposed the revolting treatment and lack of care which led to eventual reforms in how those suffering with mental health issues were treated. Whilst I was reading Ten Days in a Mad-House I had to keep reminding myself of the time period, the late 1800’s, when this was all written and exposed and I found myself asking whether anything has truly changed when you think of how the undercover reporting by journalists in mental health facilities shows similar treatment even now, in this day and age.

Nellie Bly was a courageous lady, a fantastic journalist and, if you are strong of stomach and not faint of heart, I highly recommend you give this book a read to help make sure the name of Nellie Bly is heard throughout time.