Doctor Who - The Brain of Morbius 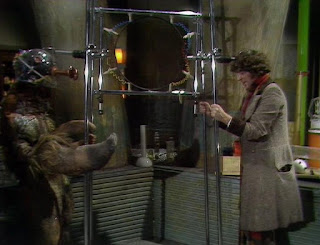 Our Doctor Who expert, Tony Cross, is journeying through all of time and space to bring us his thoughts on every available Doctor dtory. Today is the Fourth Doctor adventure The Brain of Morbius...

Season 13 chugs on in its horror influenced way, churning out excellent story after excellent story. The consistency of this season, with its increased fear quotient, makes Season 13 the best season since Season 7. Even the 'dud' story, The Android Invasion, has its moments.

'The Brain of Morbius' is the darkest of them all, so far. It is a Doctor Whoed up version of Frankenstein complete with a mad surgeon pinging about a lightning struck castle & lab in Solon (Philip Madoc). There's a dumb Igorish servent, Condo (Colin Fay) & a terrible pot pourri of a body lying on a slab waiting for a suitable head. Add a brain in a vat of green bubbling gunk, a dash of floaty mysticism in the Sisterhood of Karn & an elixir of life and what's not to like.

Throw in the Doctor and Sarah whose arrival on Karn might be a Timelord skullduggary and give the brain a name, Morbius. That's a recipe for Doctor Who excellence.

Morbius (voice by Michael Spice) was a renegade Timelord whose army of scum and mercenaries were defeated on Karn. Morbius was supposed to have been atomised after his defeat but Solon snuck off with his brain & has spent all his time since stitching together various body parts in order to make a functional, if aesthetically unpleasant, body for Morbius. All that's missing is a suitable head. Enter The Doctor.

The Doctor's apparence on Karn however raises the suspicions of Maran (Cynthia Grenville) the grumpy leader of the Sisterhood. She thinks he's been sent by the Timelords to steal the elixir of life, which is a convenient by-product of their Sacred Flame. Her right-hand woman is Ohica (Gilly Brown) who does a lot of over-emoting & starry eye work. The Sisterhood will be sacrificing The Doctor to their flame.

Pseudo-religious rituals never look quite right on Doctor Who. There's something innately am-dram about a bunch of actors stuck in a small studio giving it the full cultist. So the Sisterhood's nicely choreographed dance around the Doctor's pyre to be complete with some sibilant chanting is quite good, if still a tad unconvincing. Cynthia Grenville though is marvellously cranky as Maran.

Poor old Sarah gets a bit of a rough time in this story: threatened, tied-up, blinded, rudely accosted by both a brain in a jar & Morbius' artificially with headed body. After this you'd think the Doctor would take her somewhere for a nice rest. Liz Sladen certainly gets to run through the emotions in this story, including the now regular 'Doctor's death' scene. Funnily even the Doctor says that she keeps doing that. By now, if I were Sarah, I'd assume he was alive & well until definitive proof were offered.

Philip Madoc's Solon is an excellent take on the mad scientist with just the right amount of hammery. He's never too over the top, just walking a fine line. The script gives him some great lines, especially his scenes with the dim but dangerous Condo.

There's some genuine scenes of horror in this story, with the two darkest being when Sarah stumbles on the moving headless body in Solon's lab & when Condo is shot. There's blood, which is the first time I think we really see 'real' violence. I'm not sure whether the unreality of Doctor Who makes violence more or less shocking. I certainly feel that blood or no blood Classic Doctor Who is much more violent than its present day counterpart.

Quibbles: The Doctor is a bit stupid in a couple of scenes, e.g. the whole shake hands with Morbius moment; Maran's death scene is a little odd because she somehow gets herself into the cubbyhole where the Sacred Flame burns, even though it looks tiny; & the throw away scene in the mind bending contest that implies there's been earlier incarnations of the Doctor. However quibbling about continuity in a series where the hero travels around in a time machine messing about with history seems churlish.

This is another excellent story in a wonderful season.

This nice fan trailer is a good intro: