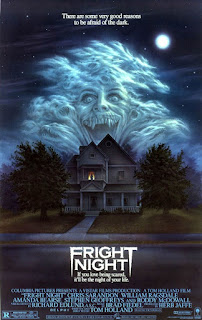 It's DAY 8 of David Ames' Vampire themed Hallow-vent Calendar as he counts the days until our favourite spooky celebration of the year - HALLOWE'EN! Behind today's window is Fright Night...

Again I have to go back to the 1980s as I will multiple times this year for the Hallow-Vent calendar. They were such a magical time for Vampire movies and when one thinks about 80s horror films, the list can hardly be complete without 1985’s Fright Night.

Charlie Brewster is a 17-year-old obsessed with horror movies, television, and of course sex. His girlfriend, a chaste young lady who is hesitant to go further, is both attracted to and repulsed by his love of the macabre and when Charlie becomes convinced that his new neighbor is actually a vampire, he loses that relationship. Charlie investigates, calls the cops, tells his hilariously stereotyped 80’s best friend about the neighbor but no one will believe him. When the Vampire catches wind of Charlie’s interference, Charlie’s entire life is in jeopardy, as are the lives of his friends and only with the help of aging movie star Peter Vincent can Charlie hope to defeat the Vampire master, Jerry Dandrige.

Now that the basic 80s plot has been discussed, it is time to really break the movie down. It has everything you would want in an 80s movie. There is humor, terrible style, great music, and cheesy dialogue. As Charlie, William Ragsdale perfectly portrays an obsessed teenager who is also obviously a 24-year-old playing 17, as per the 80s cliché. Chris Sarandon is great as Dandrige and actually has moments that make him genuinely creepy. Roddy McDowell plays the ageing, cowardly Peter Vincent with perfect manipulative panache and humor and delivers some great, sage advice while at the same time hiding.

Amanda Bearse, best known for playing the neighbor in Married With Children, is beautiful and sensual and even creepy as hell when her face turns all teeth later in the film. Lastly, Stephen Geoffreys plays Ed, the best friend, who is so over-the-top 80s that I can’t help but love everything he does. He is funny and stupid and abrasive and makes an excellent vampire.

The biggest selling point of this movie, for me as a horror fan, are the surprisingly great gore and practical effects that are used. The blood, the facial alterations, and especially Ed’s transformation at the end are all great elements of the film and when combined with all of the 80s nostalgia inherent in this film, you can’t help but fall in love. Check it out, and then, maybe you can watch the 2011 remake with Colin Farrell. Before you do though, please do yourself a favor and enjoy this 80s classic.