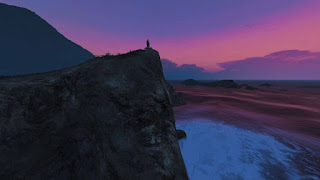 Imagine you wake up one day and all your friends have disappeared. The friends that should be there are gone. You look everywhere, but cannot find them.

This French animation short film from Jonathan Vinel is part of the ‘My Loneliness is Killing Me’ programme and is quite a unique take on the emotions and feelings of loneliness we have all suffered at some point or another, only done in 16 minutes. Imagine if you will a soft spoken French voice narrating the loneliness of his friends having disappeared, the guilt he feels that maybe they have gone because he drove them away or did something wrong, that he wishes he had studied them more closely whilst they were with him so he wouldn’t forget their faces now. The entire narration portrays the sadness that one feels when they are lonely perfectly. It is emotive, it is cutting in places, and it is most certainly real. Now imagine all this powerful inner monologue I have described laid over what can only be explained as a violent video game in the vein of Grand Theft Auto. The imagery of a computerised Martin using a bazooka or automatic weapons, fighting the police and civilians, trying to blow things up and start fires when mixed with the obvious emotion in the narrator’s voice is mind blowingly effective to get the message across of how loneliness can feel inside yourself and yet on reflection relatively simple as a concept.

What the creators of Martin Cries have done is make a short film that resonates on both a verbal and a visual level with a subject matter that the majority of film goers will have gone through at some point in their lives. With the emotional narration and physicality of the imagery, mixed with thought provoking music from the likes of Maher, they have produced a stunning portrayal of a very real issue and I commend them for their work.