Film - The Unseen Fights to be Seen 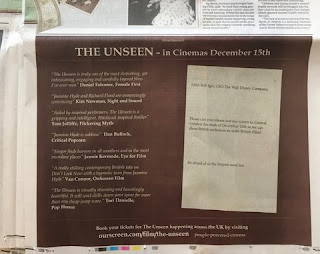 Mid-December sees the release of the Disney Star Wars blockbuster The Last Jedi. However other films ARE available and one indie film-maker is doing his best to make sure his film gets the screen-time it deserves...

Gary Sinyor, director of critically acclaimed horror/thriller The Unseen, took the unusual step of taking out an advertisement in Monday's (27th November) Guardian newspaper asking Disney CEO Bob Iger to release one cinema screen in Central London so he can show his British-made indie film, due out on 15th December, on a London screen ONE DAY after Star Wars opens.

Please can you release just one screen in Central London the week of December 15th so we can show British audiences an Indie British Film?

Be afraid of us the Empire need not."

The Unseen, which stars Jasmine Hyde, Richard Flood and Simon Cotton, has been billed as a gripping Hitchcock inspired thriller. It was made with a crew of just 8 and a budget of one thousandth that of the Disney juggernaut and follows the story of a couple who lose their son in a tragic accident, only to then be haunted by his voice. The film has received amazing reviews (read Ren Zelen's review of the film here) yet the multiplexes and even the small independents only have eyes for Star Wars: The Last Jedi. Understandably, with box office takings struggling each year, the Star Wars film offers a big pay day at the end of the year to all involved but it doesn’t give audiences much choice about what to see and that’s frustrating for British film-makers.

The Unseen's director Gary Sinyor said, “The new Star Wars film is going to be not just in every cinema complex but also nearly screen and for nearly every performance. Disney’s terms were so strict that American cinema chains threatened to boycott it. One small screen in Central London would have a negligible effect on them but means a huge amount to an independent British feature film. With such outstanding reviews for The Unseen a direct appeal to the head of Disney to release a screen was the obvious thing to do.”

Whether or not Gary's plea to Disney works remains to be seen but, for now, if you want to see The Unseen you need to book your tickets early (by 10th December at the latest for any of the screenings and dates) through OurScreen HERE.

Here's a reminder of the film's synopsis and trailer:

Gemma (Jasmine Hyde) and Will (Richard Flood) are shattered when their son dies in an accident. Gemma blames herself and starts to have panic attacks that affect her eyesight - and the audience's point of view. Will, tormented, believes he is hearing his son's voice calling out to him. To escape their grief, Gemma suggests they take up Paul's (Simon Cotton) offer to stay at his Lake District country getaway. Gemma, helped by ex-pharmacist Paul, tries to stop her panic attacks with medication. Will, unable to hear to his son in his bedroom back home, antagonizes Paul and suddenly goes home. Gemma is now reliant on Paul who appears to be developing genuine feelings for her welfare. Love, grief, and the frailty of the human condition are all brought to the fore as Gemma Will and Paul are caught up in a descent into violence, both psychological and ultimately physical.

The Unseen will be in UK Cinemas from 15th December - Book your tickets here: https://www.ourscreen.com/film/The-Unseen
Email ThisBlogThis!Share to TwitterShare to Facebook