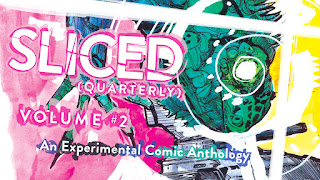 Help comic creators get experimental work into print as the Sliced Quarterly comic anthology is running a crowdfunding campaign to print its second trade paperback collection...

After a highly successful Kickstarter campaign last year saw the publication of Volume 1 of the experimental comics anthology, editor Ken Reynolds is looking to do the same again for Volume 2.

Ken describes Sliced Quarterly as "a playground for creators to experiment with the comic book narrative and showcase simple, authentic, literary stories told in extraordinary ways, testing the traditional norms of the medium, and in so doing, elevating how they connect and communicate with the reader."

Each issue highlights the best and the brightest of cutting edge sequential narrative art in its ability to be insightful, emotive and provocative (see Steve's review of ISSUE #8) and the Sliced Quarterly Kickstarter campaign is now live, with the money raised being used to fund a first print run of collected issues. Volume #2 will collect issues #5-8 (Volume #1 has issues #1-4) of the experimental comic anthology that have been published for the last year online as well as adding never-before-seen bonus material and comics not currently available in the website editions.

The campaign is looking to raise £2,400 by the morning of Friday 16th February but, as always with Kickstarter, if they don't reach their goal in time, they don't get any of the money already pledged. So, what do you get in return for your money? 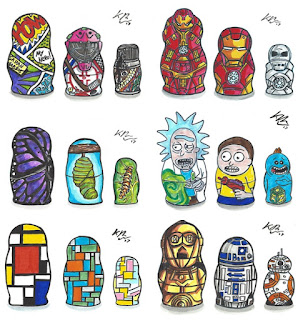 As well as being able to PRE-ORDER the book itself, either in digital or paperback format, perks for pledging include signed and sketched limited edition bookplates/sketch cards, the chance to commission your own unique Nesting Doll artwork by Ken (see examples above) as well as the chance to pick up subscriptions to the wonderful Comichaus comics streaming app (read Steve's review of the app to find out why this is such a great deal) to support the campaign.  Comic creators can also pledge towards the campaign and get access to the incredible comics experience of Ken either with an editorial assessment of a comics script or to get their own comic lettered by Ken in a deal that works out as a massive reduction on his normal lettering rate (and you get most of the other perks thrown in too!)

All the current digital issues can be read and downloaded for free on their website at www.slicedquarterly.co.uk so you can try a sample of what's on offer before you decide to pledge (but remember that the print anthology will have a whole load of never-before-published material in it too) and you can support the Kickstarter campaign direct HERE.