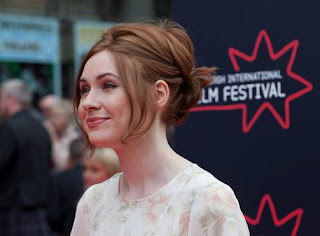 Karen Gillan is best known for her role as Amy Pond in the BBC science fiction series Doctor Who, and for portraying Nebula in Marvel’s Guardians of the Galaxy films, a role which she is set to reprise in Avengers: Infinity War. Gillan portrayed the female lead in the global box office hit Jumanji: Welcome to the Jungle and last year was featured in Netflix’s The Circle. Off the screen, Gillan is an avid writer and director with her first feature film, The Party's Just Beginning, currently in post-production. Her debut short film Coward received its world premiere at EIFF in 2015.

Gillan said: “I am delighted that EventScotland is supporting EIFF’s The Young & the Wild programme for the Year of Young People 2018. This builds on the great work EIFF has been doing for the past four years in developing and inspiring young people who have a passion for cinema. Through this programme young people will be able to access great international cinema, but more importantly learn from filmmakers from around the world who will visit EIFF in June.”

Edinburgh International Film Festival Deputy Artistic Director, Diane Henderson added “For our 72nd Festival in June we’re delighted to be able to expand on our popular youth strand The Young & the Wild.  To have support from Karen Gillan, one of Scotland’s most treasured and successful actor/writer/directors, is a huge honour for us. Karen is already one of our esteemed Honorary Patrons and to have this additional support from her means a great deal to all of us here at EIFF.”

In 2018, Scotland puts its young people in the spotlight, celebrating their talents, contributions and creating new opportunities for them to shine. The Year of Young People 2018 is a year-long programme of events and activities that will give young people in Scotland the opportunity to show the world what they are made of. As part of these celebrations, The Young & the Wild will offer inspirational screenings and hands-on events for young people interested in filmmaking and the moving image industries, including practical filmmaking workshops for primary and secondary schools; in-person events; masterclasses with world-class filmmakers; and special careers events for 15-25 year-olds. EIFF will also launch a Scottish Young Filmmaker Competition for 14-25 year-olds, with the shortlisted films screening at a special event at the Festival.

The newly expanded strand will significantly increase the Festival’s programming of screenings and events for young audiences interested in filmmaking and the moving image industries. The Young & the Wild is supported by the Year of Young People 2018 event fund, managed by EventScotland, part of VisitScotland’s Event Directorate.

Paul Bush OBE, VisitScotland’s Director of Events was "delighted that Karen Gillan will be the patron for Edinburgh International Film Festival’s Year of Young People strand The Young and the Wild," adding that “The expansion of the festival’s youth element for the Year of Young People is a great opportunity for young people to learn about the film industry, showcase their creative talents and develop new skills. It is great to see prominent figures in Scottish culture, such as Karen Gillan, supporting EIFF during the Year of Young People. It will be without doubt an inspiration for young people and her patronage shows why Scotland truly is the perfect stage for events.”