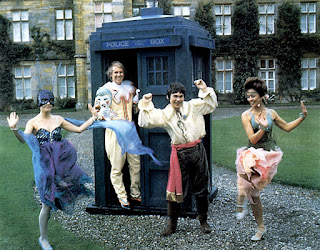 Our Doctor Who expert, Tony Cross, is journeying through all of time and space to bring us his thoughts on every available Doctor story. Today is the Fifth Doctor adventure Black Orchid...

I'm not quite sure what to make of that. A two parter, an historical & no galactic threat to fight against. Just the Doctor getting involved in a story of domestic secrets in a posh house in the 1920s.

It's charming but as inconsequential as a passing fancy.

There's fun for all the regulars: Janet Fielding gets to dress up & Charleston, Matthew Waterhouse gets to eat and Peter Davison gets to pretend to play cricket. Most importantly Sarah Sutton gets to play two parts: Nyssa & her double Ann Talbot, which is nice. Sutton does it nicely, although it isn't that great a stretch really. I wish when we met coincidental doubles like this someone would go to the effort of asking for a different accent. Nyssa's from Traken, Ann's of the posh English. So despite being separated by billions of miles they not only look like each other but sound identical. But I'm picking at that thread again & should beware lest I pull the whole jumper apart.

I'm aware that wold spoil the conceit of the two of them getting dressed up in the same fancy dress outfits & poor old George Cranleigh getting confused at the end but at least with Troughton they went down the different accent route in "The Enemy of the World".

But whilst I'm battling the bees in my bonnet can I just ask when the TARDIS became open house for all & sundry to pop in & take a spin. It happened with Richard Mace in "The Visitation" and in this story Sir Robert Muir & Sergeant Markham get a spin. I wouldn't mind so much but they seem to take it all for granted. And let's not mention Constable Cumming's reaction, which is little more than mild surprise. If I remember rightly it happens in "Earthshock" to but more of that next.

In all honesty this is a nice little break. The villain of the piece isn't evil, he's broken and sometimes you can't mend people. His death seems unnecessary really & a little forced. As if he must be punished or the children of England may start strangling their servants. Gareth Milne as George Hadleigh does a limited but effective job.

I do like the Doctor and team staying for the funeral though. It is an unusual touch. Even if Tegan's excitement about getting to keep the fancy dress costumes seems a tad out of place.

As do most of the guest stars who don't get asked to do too much exotic stuff: Moray Watson as Sir Robert Muir & Michael Cochrane as Lord Cranleigh do their aristocratic thang & Barbara Murray gets to be mildly devious and posh.

I like Peter Davison in this. His delivery of the line "Brazil...where the nuts come from" is perfectly weighted & delivered.

So Black Orchid's OK. A tad unusual but it is nice to have a different type of story.