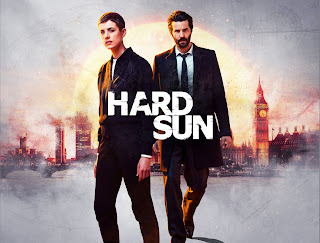 Marc Nash discovers that "pre-apocalyptic" is more than just the show synopsis, it's his state of mind as he watched BBC drama Hard Sun (slight spoilers)...

You know how disgruntled football fans make the futile gesture of protest by tearing up and throwing their season ticket on to the pitch? I feel like tearing up my TV license and throwing it - well where would I throw it? That’s how much I resent my license fee being used on this farrago of a gallimaufry.

An extinction event called Hard Sun threatens the world, but only the authorities are in the know. Until a hacker gets hold of their contingency plans to maintain social order. He ends up plummeting from his high rise, whereupon the authorities kick into gear and start wiping out those who come into contact with the memory stick containing the plans and thereby the proof of the forthcoming apocalypse. Two detectives get on the trail of the stick, one of whom was shown being violently stabbed in the pre-credits opening of the episode. (The series depicts violence very graphically).

So far so good. But then it gets weird and not dramatic good weird, just facile weird. Both detectives having become marked for death through contact with the memory stick, manage to evade their fate by releasing the information through the media. Now the authorities have a different priority, to shutdown the story so there’s no hysteria and anarchy. They manage to debunk the story and it’s like nothing ever happened. For then until the final 5 minutes of this 6-part series, the Hard Sun element virtually disappears from the storyline, apart from some “Bad Wolf” like graffiti (pace Christopher Ecclestone era Who) and an occasional existential crisis for the two cops who are the only people who know the Earth’s imminent fate. This drives their entire motivation to protect their loved ones, but you can’t protect sh*t from an extinction event. Nevertheless, they persist. Oh did I not mention, these two cops are being blackmailed to get the dirt on their partner by different interested parties; she is charged with getting proof of him having murdered his previous partner (as in cop partner not coital partner, since he is bedding his ex-partner’s wife). The other side of her deal is that her son is kept in a secure asylum rather than prison, for he was the one stabbing her in the opening scene.

So for five episodes thereafter, we have this pull-me, push-you of these two alternating between being good detectives and having stand-up fist fights because their respective private agendas are under threat of being compromised, which means their families are under threat too (never mind that they’re going to be wiped out with the rest of us). The only good thing about this show is that the bruises after the various fights are well maintained by the continuity department. Nice touch among the vertiginous narrative anarchy. So even though they both know the world will end in five years, (cue Bowie song of same name, the other palatable element of the series), they inexplicably continue being cops and solving crimes. I can only assume the crimes they pursue have been prompted by nutters who refuse to accept that Hard Sun is a mere myth and act on presumption of the imminent end of the world by seeking to purge the world of a lack of faith or sin or whatever other insanity, (talking of which her son’s mental condition is utterly unbelievable, but I won’t spoil it for you by laying out its logic in all its incredulous unglory here).

The two fundamental flaws, (three really - I didn’t expect the Spanish Inquisition) are these: that you can somehow protect your family, or at least ease their discomfort in the face of the world’s extinction, and that the authorities, here in the guise of MI5, will at the point of global destruction keep their promise to look after your family and make sure there’s a space for them in the bunker which still won’t be enough to protect them anyway. Secondly, you start the series with a global threat, but then shrink the scale to bog standard detective pursuit of murderers, on a very small human scale. There’s now flow or rhythm to the show either, one murderer manages to sustain across two episodes, whereas the others are consummated within the confines of a one hour episode. And finally, when you know the earth is slated for destruction, why would you still piss about doing your job? Why wouldn’t you just go and hug your family until the overwhelming knowledge breaks your sanity and you become a gibbering wreck? Utter, utter dreck. And nonsense to boot.