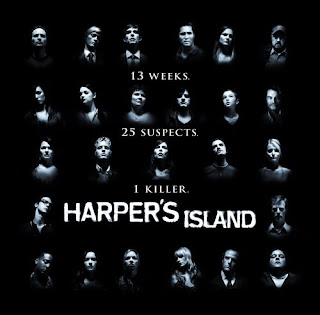 VentSpleen has been unpacking some of his long neglected DVD collection. Up today is Harper’s Island…

This was a wonderful find and it’s been several years since I visited Harper's Island.

"One By One" the whispered child's voice echoes ominously at the start of each episode, this isn't going to end well.

Harper's Island debuted on ABC in 2009 and was to air over 13 consecutive weeks. The concept was simple enough, attractive young girl returns to her childhood home 7 years after a serial killer ripped her family apart. She thinks the killer is dead, but he might not be and the killing begin, yada yada yada! So far so yawny you may think, but you would be very wrong, as to consign Harper's Island to serial killer oblivion would be to do the series a terrible injustice. You see, Harper’s Island is self-aware and hits its genre clichés deliberately and with much tongue in cheek. Just as you think yet another nauseatingly stereotypical character is about to be messily ended the writing takes a sharp turn and wrong foots you. Nothing is what it seems and things that seem complicated aren't! The writing is as sharp as the many and varied dispatch methods and the characterisation instantly engaging.

The beauty of Harper's Island is in the sheer enjoyment that is to be had with the twisted and dark relationships, it’s like unwrapping some sort of delightful deadly Christmas present. No escape either as they are stuck on an island for a whole week, see what they did there? Each episode is titled to give you a hint as to how the character is going to die but seriously, how can you dislike a series which has an opening episode called "Whap"? Clever as well to have all of the cast staying in one place with a week long celebration of a wedding, The characters here are no Jason bait (Hodder Fodder) you have feelings for them whether its dislike, hatred, pity or like ability, Harper's Island is written so you actually care what happens. This sounds like an obvious writing tick box but so much of modern horror fails to effectively engage because not enough care is given to the back stories and characters.

It is a shame that Harper's Island didn't attract a larger audience because the plan was to produce further series along the same idea. In a world where film and TV can be accused of being banal and a waste of time, Harper's Island was that rare gem in that it truly entertained from the beginning.