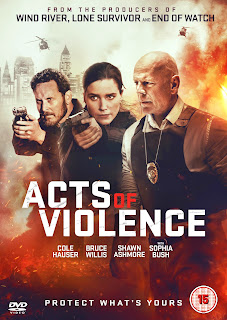 Steve Taylor-Bryant watches Acts of Violence, but was it worth fighting for...

When his fiancee is kidnapped by human traffickers, Roman (Ashton Holmes) and his ex-military brothers set out to track her down and save her before it is too late. Along the way, Roman teams up with Avery (Bruce Willis), a cop investigating human trafficking and fighting the corrupted bureaucracy that has harmful intentions.

'Straight to video' used to be a judgement on a film’s quality. They would be the pulpy action flicks that didn’t require a cinema run as the filmmakers knew they wouldn’t make any money, they would garner a small hardcore audience, usually adolescent males, and that would be that. With the rise in popularity of streaming services the ‘straight to’ label is no longer useful as a rating for an audience. Mute and Annihilation, at least in the UK, are ‘straight to’ films and Mute is one of my favourite movies of the last few years. When you can no longer prejudge something then you run the risk of having to watch an hour and a half of trashy garbage that belongs in those discount bins in 1980’s stores. There is also the chance that you can watch something amazing that just happens to have been made by a company that doesn’t use cinemas, Netflix and Amazon are producing more hits than misses lately after all. But you also get the odd film slipping through that doesn’t seem to fit either end of the spectrum. Acts of Violence is one such film.

I can’t sit here and tell you I didn’t enjoy my viewing experience because in the main I did. I also, however, can’t in all decency sit here and recommend the movie to anyone. It doesn’t seem to know what it is. The action sequences, most of the scenes containing Bruce Willis, are just what you would expect from a Bruce Willis action flick with plenty of the bargain bin tropes, one man killing machine, revenge, yada yada yada, but there are also some scenes and performances of absolute quality that if I’m honest I would have preferred to see in a different film. If you just take the revenge, kidnapping, good guys versus bad guys elements of the film you have a Bruce Willis film, you know what you are going get, and since Bruce is the focal point of the marketing, I guess my review has to state that this is a Bruce Willis action flick, the kind you find going ‘straight to video’ when that meant something. There, now you choose whether you watch it or not.

I like to find some positives in things and so I’d also like to draw your attention to the part above where I mentioned absolute quality and highlight Cole Hauser as Deklan, the military veteran struggling with his demons. I’ve been a bit harsh on Hauser in the past, I can’t remember which film it was (probably 2 Fast 2 Furious) but I called him the poor man’s Matthew McConaughey. When you want McConaughey but need to blow your budget, or any potential Oscar buzz, you hire Hauser. Therefore I have only really seen him before in daft, mindless action films, so I never rated him as an actual performer with hidden talent. As Deklan in Acts of Violence though he is mesmerising. He shows the real trauma that veterans suffer, the loneliness, the difficulty reintegrating, with holding down relationships, and he does it so bloody well that, to be honest, he wasted in what is essentially a middling, generic, Bruce Willis movie.

What I’d have loved to have seen in the film is more of Hauser and his struggles, what really happened to him, find out how (or even if) he can achieve the inner peace he needs to fend of those demonic thoughts, without having to basically kill the bad guys and then smile for the camera. Whether there were more scenes of Deklan filmed but not included in the end result I don’t know because the writing of Nicolas Aaron Mezzanatto comes across as messy. Either the film was heavily edited, meaning not all the writing matches up, or it’s just a bad screenplay but the scenes, especially at the beginning, the narration of what Deklan has written, show an incredible depth of emotion that I’d have liked to have seen a lot more of.