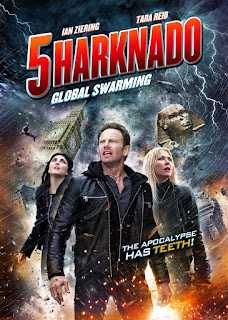 Are we in danger of jumping the shark yet? The legendary comedy-horror-disaster franchise is back and bigger than ever! Sharknado 5: Global Swarming comes to DVD & Digital on 2nd April from Tribal Films. Watch the trailer...

With much of America lying in ruins, the rest of the world braces for a global sharknado, Fin and his family must travel around the world to stop them.


Starring Ian Ziering (yes, Steve Sanders from 90210 is still chasing sharks) and Tara Reid and featuring cameos from just about anyone you can think of that would do cameos in this kind of film (Samantha Fox, Dolph Lundgren, Brett Michaels, Olivia Newton John, Tom Daley... No, seriously, they're all there and more) the film hits DVD and digital the day after April Fools Day. Coincidence?