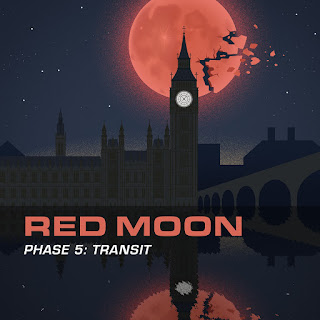 I’ve been part of this thing since before the beginning…

This is the penultimate episode in the Red Moon series and, sadly, I found it to be very filler-y after the success of episode 4.

Normally at this point in the review I would give a little build up synopsis from the start of the episode but, to be honest, I wasn’t entirely sure what was happening with the meeting between Eddie Sloper and someone called Murray. This was mostly because I couldn’t remember who Murray was in the story until I did a trawl back through the previous episodes and rediscovered the “accidental” meeting that Sloper had at the American Embassy with an old friend, Major Murray Kovach, who was in the UK to repatriate the body of ex astronaut Chad Henderson, back in Episode Two. Armed with that piece of knowledge I tried listening to episode 5 again and it did make more sense second time around, although, to be honest all of Kovach’s information was no less filler-y for me but maybe it will make more sense in the context of the final episode. The story picked up a little in the second part of the episode, after the meeting with Kovach is abruptly ended, as Sloper and Madison head north to gain access to RAF Spadeadam, with a little help from an unexpected source, to try to put a stop to Operation Darkside.

I hate to be so negative over a series that I have thoroughly enjoyed up until now but this episode just didn’t gel for me at all as it seemed to take a long route to get not very far along the main plotline – I guess it was called Transit for a reason. Character-wise, it didn’t seem to fare much better either. Remember I said that Sloper and Madison had a kind of chemistry in the last episode? This time, not so much. Although the two characters in themselves were still good and they work well as a team when actually working together, I felt their chats were awkward when they talked about personal matters rather than the case. The discussion in the car going to the Space Comm site in Cumbria felt especially uncomfortable – the almost shouty jovial tone didn’t suit the emotive subject matter which seemed to be far too intimate to be small talk and not relevant enough to be intrinsic to the plot. The minor characters this time too were, for me, irritating and implausible ("my dear") but not nearly as distracting as the sound design. This wasn’t really the sound guy’s fault though as there was a lot of no-dialogue action, running around inside and out, climbing through fences and so on, going on in this episode and that’s difficult to portray convincingly in an audio.

And what was the sex-club thing all about? Avoiding the obvious pun (for once), I can only hope that the finale of the series is worth waiting for.

You can stream Phase I of Red Moon FREE on the Wireless Theatre Company website where you can also buy Episode Five for only £1.49 and find the rest of the series as the episodes are released.