Book - A Gentleman in Moscow 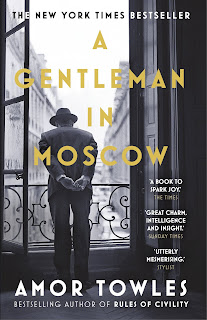 Steve Taylor-Bryant heads to Russia, and it's not for the football, as he read A Gentleman in Moscow by Amor Towles...

In 1922, Count Alexander Rostov is deemed an unrepentant aristocrat by a Bolshevik tribunal, and is sentenced to house arrest in the Metropol, a grand hotel across the street from the Kremlin. Rostov, an indomitable man of erudition and wit, has never worked a day in his life, and must now live in an attic room while some of the most tumultuous decades in Russian history are unfolding outside the hotel's doors. Unexpectedly, his reduced circumstances provide him entry into a much larger world of emotional discovery.

On page 402, just as the book is building towards its climax and possibly the most tense and action filled segment, there is a line that is just perfect in explaining how A Gentleman in Moscow is crafted. “Life does not proceed by leaps and bounds. It unfolds”. This is the tale told in the novel, it is an elegant unfolding of situation and memory. Across the decades that pass whilst Rostov is incarcerated within the hotels walls he makes friends, he works, he meets guests and, with each conversation or action, a memory presents itself. Whilst maybe a discussion with the Maitre ‘d about wine taking numerous pages to conclude might not sound enticing, the memory that Rostov almost narrates to the reader is essential in understanding the man, his character, and most importantly the changing political atmosphere in his beloved Russia. There is not much pace or punch in the narrative instead you are treated to a glorious tale, one so rich in character and depth that when it ended I was genuinely sad that I had finished.

Amor Towles was not an author I was familiar with before A Gentleman in Moscow, an impulse buy in my local book shop, but one I’m definitely going to read again. He writes with a style that immerses you in a world and allows you to understand characters you may not have too much in common with, his narrative seems gentle in a world that was full of turmoil and I found that refreshing; a history lesson about Russia in the twentieth century without any political message being forced upon me. But mostly what I took from my journey through Count Rostov’s life was the beautiful way that Towles showed the man as a reluctant father figure forced by situations to adapt and care and the two parts where Rostov strikes up these relationships with two young girls that left the biggest impression on me. Being a father myself probably before I was ready I couldn’t imagine how I would have raised a child whilst stuck in one building and the way Rostov struggles at first but then managed to structure his life to fit and care about someone other than himself was magnificently written.

I’m not usually one to use platitudes such as glorious and charming but on this occasion I just have to marvel at what Towles managed to achieve within the confined space he put his character, marvel at the way that Towles managed to explain a complex half century without any of the background feeling forced upon me, and I had to marvel at how A Gentleman in Moscow filled my heart with such happiness whilst I was reading that I felt genuine loss come its climax. Bravo.