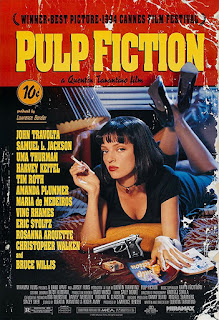 It goes to show you never can tell... Kraig Taylor-Bryant has just watched his first ever Quentin Tarantino film! Here's his thoughts about Pulp Fiction (spoilers)...

When I first went into watching a Tarantino film, I really didn’t know what to expect. Sure, I knew he was a famous director, but I was unsure what made his style of film making so significant, and special to those familiar with him. After watching this, I have to say that I not only understand why he is such a popular director, but I'm actually now a huge fan of the style he follows when making a film, because it is something unique, and something we don’t see often enough in mainstream cinema today.

In Pulp Fiction in particular, the story is multi stranded, following multiple characters, and seems to loosely link together, with a few that don’t necessarily fit anywhere else. The first two characters we see are only ever referred to through each other’s nicknames, "Pumpkin" (played by Tim Roth) and "Honey Bunny" (played by Amanda Plummer) and that’s what makes these characters intriguing. Personally, I would have liked to know a little more about them, but I think it's clear that the mystery behind these characters is what helps to keep the audience engaged through even the events of the film that are not the most climactic. What's interesting also, is how the intro to the film with these characters seems to escalate so quickly from a surprisingly chilled conversation about robbing banks, and about the benefits and drawbacks of robbing certain places, and then they end up going completely insane, yelling and swearing at the tops of their voices, making an interesting, unexpected and funny intro to a film.

So, after the opening credits the film introduces two new characters, which I found a little strange, as I was still wondering what's going on with the characters shown at the start of the film. These new characters, Jules and Vincent (Played by Samuel. L. Jackson and John Travolta), are particularly interesting as they appear first, on screen, in a car wearing smart uniforms but are talking about what different nationalities call a certain burger in different countries, leading them to talk about their boss, Marcellus, throwing someone out the window because they massaged Marcellus' wife's feet. This not only makes us take this "boss" character seriously early on, but also adds a bit of humour because of the weird conversations that they're having, adding to the "unexpected" which, at this point in the film, I was starting to understand was a recurring idea behind Tarantino’s work. So, this then builds to us seeing these characters go to intimidate a guy to give their boss the money that he owes him; it's funny because Jules ends up eating the burger that the guy is having whilst talking about what they call a chicken supreme in Paris (or something like that) and they end up saying it's because of the metric system (which I thought was hilarious) and then shooting two of these people on the spot. This was definitely not expected, because you would think that the boss would intimidate them to get the money to them by a certain day, but again Tarantino astonishes us by giving us something different, something that made me like Samuel. L. Jackson that little bit more. I honestly have really only known him for his more mainstream roles as Nick Fury in Avengers, or Mace Windu in Star Wars, whereas, in this film, you get to see him act in a completely different style (as he's swearing every other minute). 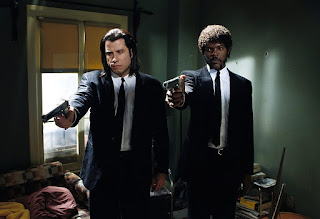 From this, the story moves to the character of Butch (Bruce Willis), as a child, who we meet when a soldier comes to his house. It's interesting, because we expect to hear a serious conversation about how his father has died in the war to get him a special family watch. But, surprisingly, he talks about the story that his father told the soldier, about the history of the watch. He talks about what his father and the soldier himself went through, he talks about hiding the watch in his bottom, and then it was passed to the soldier to hide it there, so that it would never be found, adding to the weirdness of the film overall and also making it that little bit more unexpected. As Butch’s story progresses, when he can’t find the watch, we do clearly understand its importance to him and almost find it funny, after all that the father and his father's friend did to keep the watch safe, but at the same time, we don’t want it to be funny. Later in his story, we witness him risking being found by a gang of sorts that’s chasing him, to get this watch back from his other hotel he was previously staying in. He runs into one of the guys that’s after him and sees him leave with the watch whilst Butch is in the car. Butch ends up crashing the car in a panicked attempt to get away, leading them both to get into a fist fight and they end up in a shop with the shopkeeper pointing a gun at both of them. From here the audience could assume that the shopkeeper would call the police and that would be the ending, but as always, Tarantino greatly defied expectations by having him call his partner at the shop, and they end up sexually abusing the man who was chasing Butch. This leads to Butch and his pursuer forming a sort of unexpected friendship or mutual respect, after Butch breaks free and saves the man who was previously chasing him. What’s really interesting about all this is that it is all possible to happen, it’s just not something we ever see in film. And that’s what’s so special about Quentin Tarantino’s work.

From there we don’t really see much of Butch, but we do start to see more of Vincent, when he's looking after his boss's wife, Mia (played by Uma Thurman). It seems to start off as a fairly normal night when he's looking after her. They go to her favourite restaurant, in which they both end up dancing together, personally I suspected that she might cheat on her husband, to escalate the drama. Tarantino does still escalate the drama, but in a completely different way as Mia ends up collapsing from a drug overdose when they reach her house. Moments before, Tarantino has you questioning if something is going to happen between Vincent and Mia when Vincent is talking to himself, telling himself that he needs to leave, but when he comes out of the bathroom he finds her on the floor, barely breathing. Of course this is something nobody really expects to happen in a film and he ends up just barely saving her life, personally I thought she might die at this time, leading the boss coming after Vincent, escalating the plot a bit more, but the plot does this in a different and unexpected way, when of course, Vincent accidentally shoots the guy in the backseat of Jules’ car.

In the end sequence of the film, it wraps up, almost nicely, because we have two of the plotlines that the film followed tie in together, with “Pumpkin” and “Honey Bunny” meeting Jules, whilst Vincent is on the toilet for the most part. But what makes this really weird is that, when Pumpkin ends up collecting wallets off of everyone in the restaurant and he asks Jules for his wallet before he shoots him, Jules ends up, unusually, asking for his wallet back, but saying that Pumpkin can have the money that’s in the wallet. This is to do with his “Spiritual awakening”, after one of the people in the apartment from earlier shot at Jules, and none of those shots hit him. This is another bizarre element to this film, but it eventually leads to a somewhat peaceful resolution of Pumpkin and Honey Bunny leaving the restaurant with the money but, amazingly, without anyone getting killed. 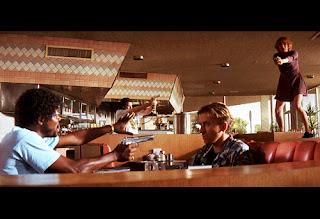 As to the overall violence of the film, I wouldn’t say there was a large amount. Sure, we got to witness a fight sequence between Butch and a man in a suit who’s after him, but overall there was drama and a lot of intrigue, but not a great deal of violence. As well as this, the film manages to keep the violence in with the narrative to almost seem natural, but since I’m not used to seeing this style of film, or perspective on violence, it was certainly a welcome shock that kept me interested through the whole film. And that is what makes this film so great, the fact that it doesn’t need to have some sort of fighting involved every five minutes for it to be interesting or enticing. For me it suits the film well, and makes me want to see more of the types of films that Tarantino does, that aren’t of the action genre.

Each moment of this film is thrilling and tense, not only because it has unusual dialogue or the fact that we keep hearing of these interesting backstories for the characters but because Tarantino keeps leading us to believe one thing is going to happen, whether it be the protagonist goes to jail, or gets shot after intimidating and killing a man in an apartment, but then flipping it, leading us to believe that from this moment, anything can happen, and that’s just fantastic.

The writing style that Tarantino uses in Pulp Fiction is really what helps it to stand out for me, the fact that he can tell a story that makes next to no sense, but not leave the audience feeling confused or angry, but intrigued or interested. This makes it clear to me what style Tarantino follows for his films, making them in a way that’s weird and wonderful, whilst keeping his audience guessing as to what might happen throughout. And it is this that has made me gain great respect for this director, I’d really like to see his approach towards other genres, to see if he incorporates such a style to them all and I can’t wait to watch more of both his previous and future works, to see what other interesting stories he has to tell.