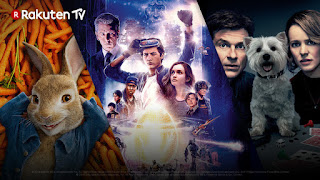 Continuing to bring you the best content straight into your home this summer, you can experience a whole world of new films this July on Rakuten TV...

First up stars Nicolas Cage in a film that’s sure to become a cult hit, Mom & Dad (read Ren's review). While this movie might focus on a family, it’s certainly not for young eyes, as a mass hysteria hits and parents, played by Cage and Selma Blair, turn violently against their children who must fight to survive.

A heroine and expert in the art of survival is up next with Tomb Raider, led by the Oscar-winning Alicia Vikander in the most kick-ass role of her career yet. She’s in good company with Proud Mary lead by Empire and Hidden Figures actress Taraji P. Henson who has traded in the music business and mathematics for organized crime in this assassination action thriller gone wrong.

Kicking things up a notch even further, if you’re in the mood to see some serious action, robots and a heavy dose of nostalgia, in July Rakuten TV will be powering up Pacific Rim: Uprising and the newest release from filmmaker Steven Spielberg, Ready Player One (read Nate's review) which you’ll be able to see in brilliant 4K HDR. You will also be able to catch Suicide Squad (read David's review), The Prestige, Live by Night and Game Night in the glory of 4K on Rakuten TV.

If that’s not enough for you and you need to be pulled further to the edge of your seat, you can catch John Krasinski’s hit supernatural horror A Quiet Place, which will have you holding your breath and wanting to check under the bed before you go to sleep.

Toning down the level of danger, if those aren’t your speed and you’re looking for a film for the whole family to enjoy, you’re spoilt for choice with Peter Rabbit, Tad, The Lost Explorer and Disney’s A Wrinkle in Time for fun adventures for all ages.

Also out this month is Mary Magdalene starring Rooney Mara and Joaquin Phoenix; Blockers starring Leslie Mann, John Cena and Ike Barinholtz and Thoroughbreds starring Olivia Cooke, Anya Taylor-Joy and one of the final performances from the late, Anton Yelchin. 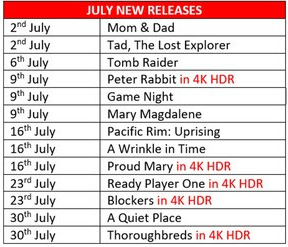 All these titles will be available through Rakuten TV on Smart TVs, tablets, PCs and consoles in the best audiovisual quality. Rakuten TV currently provides an extensive catalogue of the latest movies and classic films to their users in the UK, for a cinema experience in their own home on a pay per view, rather than subscription, basis so you only pay for the films you watch, not a set fee per month.