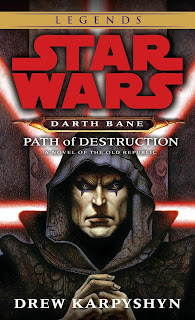 Our own Star Wars legend Kraig Taylor-Bryant listens to the audiobook of the Star Wars Legends Darth Bane novel Path of Destruction by Drew Karpyshyn...

“In the blockbuster movie, Star Wars: Episode I The Phantom Menace, we learned about the 'Rule of Two,' which decrees that there can only ever be two Sith Lords in existence at once--Master and Apprentice. The powerful Sith Lord who destroyed all his adversaries, killed his own Master, and invented the Rule of Two was the legendary Darth Bane. This is his story"

Have you ever wondered whilst watching the original trilogy, or the new trilogy, or even the prequel trilogy, why is it that there is only two Sith at one time during these films, why is it, even when the empire is ruling, that they don’t train others in the ways of the dark side? Well, Darth Bane: Path of Destruction (written by Drew Karpyshyn and narrated by Jonathan Davis) gives a perfect explanation on a line once spoken by Yoda in Star Wars the Phantom Menace, “Always two there, no more, no less, a master and an apprentice”. By using the term “always”, Yoda was really referring to the long 1000 years that they had of peace before realising that the Sith now operate purely from the shadows. This audiobook sets into motion Darth Bane’s vision for the Sith after realising that the Sith order he was currently being trained under contradicted itself. It tells the story of a man that learned about what the Sith used to stand for, deception and cunning, and the idea that only the strongest were allowed to survive. In the current “brotherhood of darkness” everyone was considered to be equal, which of course, goes against what it means to be Sith.

This story has a great way of telling you what it DOES mean to be Sith, by simply showing you what Bane goes through in this story. He consistently uses deception to his advantage and, to the questions he asks regarding any contradiction or lesson that makes little sense, he gets no answer, showing clearly the uncertainty within his own order. Through the story Bane goes through many difficult stages of his life, from when he was a child, working in the mines, with an abusive parent who called him the “Bane of his existence”, to working in the military and almost getting punished for disobeying a direct order because he knew that his commanding officer didn’t know what he was doing. It’s incredible to see how a man can grow to hate that which we all typically know to be the good guys, but that’s usually because the good guys have to do a few questionable things of their own to win any war. In this particular instance, the Republic had hired pirates to oversee mining of a material that would enhance the Republic soldiers’ armour, they would be worked long hours because the pay would be awful and, for those that were in debt to their leader because they borrowed money from him, they had the hardest lives.

In a lot of ways this story is one of motivation too, as Bane suffers through a number of moments where he fails to prove himself as a sith. He goes through a phase where he can't stop thinking about his father, installing doubt and weakness in his own mind. Making him weaker when it came to fighting in what the brotherhood called “the duelling ring”, forcing Bane to try and prove his strength by challenging one of the best Sith acolytes in the academy, leading him to still fail, because he could not let go of the past. But what's very intriguing is that this is what also helps Bane to realise the weakness of this order, as Sirak was forced to not kill Bane, and Bane kept to his own research in the library to gain his own power in the dark side, with guidance from Githany, and secret training with one of the Sith masters, after some convincing. And it's through all this that he gained the self-belief he needed to challenge Sirak again and succeed in beating him, leading Sirak to beg for Bane to spare him.

What I also really like about this story, is that Bane is not some emotionless monster, he’s a man that simply wants to prove his strength against those with incredible strengths similar to his own. Even swaying a young woman by the name of Githany to side with him, and they start to gain feelings for each other, giving him further motivation to deceive others within the Sith order.

Jonathan Davis as the narrator has a great way of telling this tale, through his incredible impressions of a variety of characters, both male and female and even alien in some cases. He brings across the characters of Sirak, Githany, Kaan, Lord Hoth and many others and brings across these characters with great intrigue, emphasising the description of each character's surroundings, and hidden agendas.

Karpyshyn also seems to do a very good job of telling the story from multiple perspectives, from the side of the master of the dark brotherhood, and the commander of the Jedi orders’ “army of light”, that in itself is showing that the Jedi had fallen at this point, so far as to call themselves and army of soldiers, when their sole purpose is to be peacekeepers. What's really intriguing is that in this book, the Jedi seem to be more violent than the brotherhood. Lord Hoth who leads this army of light, became so tired of the never-ending war between the Sith and the Jedi that he had grown to hate them, whereas Lord Kahn had simply learned from the mistake of the past Sith and created an order where there was no deception in the ranks. The book shows us as an audience that the Sith are the real good guys in this story, and that’s why Darth Bane is forced to destroy them and create his own regime in which the Sith act from the shadows, and if there were to be deception between the one master and the one apprentice, then the strongest would survive, and go on to take another apprentice, and the Sith would still live on.

I personally would really recommend this audiobook to anyone with a keen interest in the Star Wars saga, and to anyone that’s consider diving a little deeper into the lore of it, possibly for a bit of escapism, or maybe if you just want something interesting or exciting to listen to whilst in the car or on your coffee break. The book describes enough to have you caught up and understand enough about what's going on without having to know anything else about the lore, and that’s what's amazing about this novel, making it certainly worth a try.