Doctor Who - The Doctor's Daughter 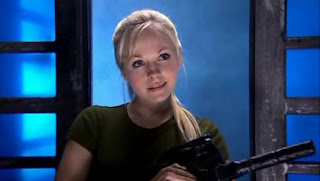 Our Doctor Who expert, Tony Cross, is journeying through all of time and space to bring us his thoughts on every available Doctor Episode. Today is the Tenth Doctor adventure The Doctor's Daughter...

It's the Doctor's Daughter. The first in a line of titles that are there to titillate the fan base whilst being a tad disingenuous: see The Doctor's Wife and The Name of the Doctor for further examples.

Jenny is 'the Doctor's Daughter' but not quite in the way people expected. She's an instantaneously created progeny drawn from the Doctor's DNA. She's also played by Georgia Moffett, who is Peter Davison's daughter. And now David Tennant's wife. Which makes this retrospectively a little...weird. But only retrospectively.

I like Jenny (and Georgia Moffett). She seems to have inherited a lot from the Doctor's DNA including the more Tigerish aspects of his personality. Jenny was created to be a soldier. In a war that's lasted so long generations have died fighting it, which produces a rather nice twist near the end (as well as providing Donna with another fine moment). The war is between humans and Hath. The Hath are sort of fish-humans with a flask in their faces, which I assumed is required for breathing.

Truth be told the plot isn't that important in this story, which is more about reiterating what the Doctor stands for and represents. Through his 'daughter' we get to relieve some of the traumas of the destruction of Gallifrey and the impact that had on the Doctor. It's a chance to pop some of the Doctor's pretentions about not being a soldier, but still manages to reiterate that he is 'the man who wouldn't.'

There's also a brief mention of the Doctor's death wish when Martha (Freema Agyeman) says words to effect of "I thought we'd found you something to live for, not another thing for you to die for." I have (briefly) touched on the far darker television series you could make out of the post-Time War Doctor. If you were so inclined. He's a constant survivor of battles. He's the last of the Time Lords. He destroyed his own people and the Daleks (who refuse to stay dead) and he keeps seeing people die. Sometimes it is his fault. His survivors guilt must be terrifying. It's quite possible the Doctor's mad. That perhaps all that 'mad man in a box' stuff is a little more truthful than it sounds.

You can see why I wouldn't be allowed to run the show. I'd drive viewers away in droves.

There's a reminder of the darkness the Doctor brings and the toll it takes on others when Martha must watch the Hath that saved her die. Martha's response to that is genuinely (and surprisingly) emotional. It's like someone has slide a blade of icy realism into the proceedings. Even more so than Jenny's death.

There's a nice performance here by Nigel Terry as General Cobb. A distant echo of his Excalibur King Arthur. The one odd note is that Cobb is old. He's the only old person on the planet. So, when we discover the real length of the war does that imply that Cobb was there at the beginning. If so why doesn't he know what's going on. It's a question I'd like to have answered. A little glitch in the fabric of the story, which I'm sure can be easily explained (and I'm surprised the Doctor doesn't say anything).

Catherine Tate is superb once more. Donna is brilliant. It's almost impossible to imagine how annoying it is going to be when she leaves. Even though how annoying I know it is.

Then there's the ending of the episode. Somewhere out there is Jenny having adventures in space. Trying to make her Dad proud. Perhaps Jenny - the series - is as much a solution to the female Doctor problem as Romana: The Series would be. (And no this is not the time or place for THAT discussion).

Once more to cut a long, rambling article short, I really enjoyed this. Again, more than I did on original viewing. There's something great about Series 4 that I haven't quite put my finger on, but I suspect it has a lot to do with Catherine Tate and David Tennant's chemistry.