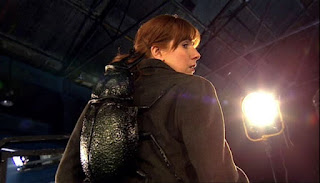 Our Doctor Who expert, Tony Cross, is journeying through all of time and space to bring us his thoughts on every available Doctor Episode. Today is the Tenth Doctor adventure Turn Left...

Turn Left is damn brilliant. A look at what might have happened to the world if The Doctor had died defeating the Empress of the Racknoss because Donna wasn't there to stop him. An elegy to the importance of companions in the Doctor's life if you like.

It also sees the return of Rose (Billie Piper) and UNIT headed up - in this instance - by Captain Mogambo (Noma Demezwani*). It's a 'Doctor-lite' episode with Tennant only popping up at the end to roll us into the next episode so Catherine Tate, with able support, must helm this episode and does so in fine fashion, proving once more what an utterly brilliant choice, she was as a companion and how good a character Donna is.

Rose's return is all rather dramatic even if Billie Piper looks a little odd. Like RTD got trapped in the Land of Fiction and had to reassemble her face Jamie and The Doctor style and didn't get it quite right. But that aside she too does an excellent job, especially portraying a rather more world weary and unhappy Rose.

Kudos too for the mighty Bernard Cribbins as Wilf. Cribbins is such a good actor that every scene he's in, whether it is comedic or serious, is lifted by his presence. Jacqueline King does her usual excellent work too as Sylvia Noble and she gets a bit more to do in this episode than just nag.

Perhaps the best guest performance though comes from Joseph Long as Rocco, a fellow London survivor billeted in Leeds with the Nobles and doomed to be driven off by the army as the post-apocalyptic Britain goes fascist. Fear makes companions of us all, the First Doctor said a long, long time ago, but it can make nasty little tyrants of us too. That was reflected not just here in Turn Left but also in The Doctor's Daughter and - most obviously - in Midnight.

Donna's final solution to closing the alt-universe she's in is a brave and moving one setting up a slightly darker tone for the last two episodes of Series 4.

In my opinion Series 4 has been the consistently best of New Who. The quality of the stories, the performances (especially those of Tennant and Tate), the plotting and the shear unadulterated fun of the thing. This is RTD's best work, so far. Even the arc of the season has been built with some subtlety so that we know something is up but we're not quite sure what it is. Except it is bad. Very bad.

O and I like the way RTD sows the fates of The Doctor's companions into the plot of Turn Left and that Sarah Jane, Martha Jones, Captain Jack and Torchwood all get a mention (and it is another little bit of foreshadowing what is to come) and they all go out in this alt-universe defeating the monsters the Doctor should have been there to defeat. Illustrating that the Doctor's a THE proper professional in the field of monster defeating and what his companions are capable of without him even if, as in Martha's case, they were never to have met him.

And that was Turn Left a superbly crafted bit of RTD Doctor Who and possibly one of the all-time great Doctor Who stories.

Next up The Stolen Earth - Journey's End

*I saw Noma Demenzwani in a brilliant play at The Hampstead Theatre called 'A Human Being Died That Night', based on Pumla Gobodo-Madikezela's book. I recommend both the play, in which Noma was excellent, and the book. You can buy a Kindle copy here . Advert over.