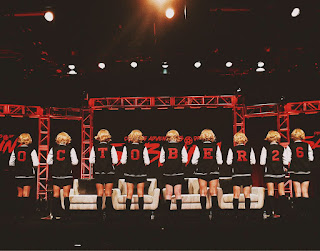 Remember the light and frothy kids' show Sabrina the Teenage Witch starring Melissa-Joan Hart? This will be nothing like that, as Netflix announce a darkly re-imagined Sabrina will drop in October...

Based on the Archie Comics graphic novel, The Chilling Adventures of Sabrina, this 20 episode, two season commission imagines the origin and adventures of Sabrina the Teenage Witch as a dark coming-of-age story that traffics in horror, the occult and, of course, witchcraft. Tonally in the vein of Rosemary’s Baby and The Exorcist, this adaptation finds Sabrina wrestling to reconcile her dual nature — half-witch, half-mortal — while standing against the evil forces that threaten her, her family and the daylight world humans inhabit.

The series stars Kiernan Shipka, who is perhaps best known for playing Sally Draper, Don's daughter, in Mad Men but has more recently been seen in Feud: Bette and Joan. When she was cast, Writer Roberto Aguirre-Sacasa, the showrunner for Riverdale, another show based on Archie Comics characters, and who also serves as chief creative officer of Archie Comics,  said: “We’re all such huge fans of Kiernan’s work that when we started talking about who this new incarnation of Sabrina could be, her name was on everyone’s wish list. This is a darker, more macabre version of Sabrina, and we’re incredibly excited for people to see Kiernan make this iconic character her own.”

The series drops on October 26th (as announced by the photo above).