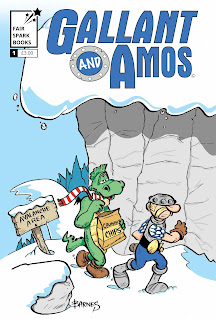 Here be dragons! Well, just the one dragon really. Called Amos. Susan Omand reads issue 1 of Gallant and Amos, written and illustrated by Rob Barnes, thanks to Fair Spark Books...

I had thought that these guys on the cover of this comic looked familiar when the press release from a new publishing imprint called Fair Sparks Books dropped onto my desk. A little bit of a dig back through the files and, sure enough, I have indeed read and enjoyed a previous adventure of Gallant and Amos written by Rob Barnes when I reviewed the second Little Heroes Comics Anthology a couple of months back. It also turns out that Fair Spark Books is run by the same person that produces Little Heroes, Aaron Rackley, so I knew the quality of the comic would be top notch and I looked forward to a fun read.

And that's exactly what I got. Completely family friendly, with fun little jokes and asides for all readers, this is a great wee comic. Within its 24 pages there are two stories and I was laughing out loud from the start. The first, and longer, story is called The Valley of the Snowmen and finds the gallant knight Gallant and his dragon buddy Amos in the snow covered peaks of “The Northern Kingdom,” a place famed apparently for having snow all year long and also having the softest toilet paper according to the Hitch-hikers Guide to the Realm. Yes, it’s that kind of humour. So when I get to the end of the first page and read Amos’ comment about the snowman he’s just built, I get that impending “what could possibly go wrong” feeling and, from there, the one-liners, puns, slapstick humour and helpful comments from the HHGR pile deeper than the snowdrifts in the pictures. But there’s also an exciting and engaging adventure story to be had as Gallant and Amos try to escape the clutches of… but I won’t spoil it for you. All I’ll say is look out for the handy voiceover in the middle of the story provided by the Loquacious Narration Guild, Union 812 (Paid by the Word. Guaranteed).

The second, much shorter, story follows nicely on from the first, thanks to the intro panel which shows footsteps coming out of the snow into a bright sunny meadow where Amos is trying to get Gallant to understand a knock-knock joke. All of a sudden, an alien spaceship appears in the sky and there is a FOOP noise but things, as always, don’t quite go as planned for First Contact. I laughed a lot at this little story and even more at some of the character names (the Duke of Erral got the loudest laugh until I realised I was probably showing my age by knowing the song).

If you’re looking for a quick, untaxing read, for yourself or for your kids, with highly likeable characters and laugh a minute dialogue, Gallant and Amos are bound to brighten your day! And, by the look of the preview panel of what’s in store next issue, they’re due to take the world by storm very soon.