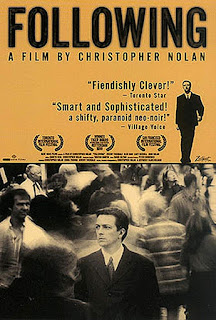 The thing I came to realise about Christopher Nolan after watching his first film, Following, was that he does a very good job at creating “flawed” characters; characters that have something wrong with them that makes them a questionable protagonist. Such as in Memento, featuring a character that suffers from short terms memory loss, in the Dark Knight trilogy Batman suffers from loss of a lot of people in his life, including his parents and his childhood friend Rachel, even in Inception we see a flawed main character who is desperately clinging to his wife and how much he misses her. In Following, Nolan explores the life of an introvert through the character of Bill.

The story follows a middle-aged introverted man and his desire to follow/shadow people, he mentions that he did this to get an insight into other people's lives and to have inspiration to feelings of others to help with his writing. This became a sign to me that he not only wants material to write about, but also wants to know what life is like for someone who isn't him, someone who lives an easier life, one with a successful lifestyle or who has friends. The fact that he’s a writer also led me to believe that he chose this job because it’s a lonely job and because he tells Cobb (one of the first few people he chooses to shadow) that he’s not a writer but he does write. This almost makes it seem like he’s trying to write, but isn't very good at it, and I believe he chose this occupation in the first place simply because he struggles to communicate with other people.

He becomes intrigued with not only the character he ends up being connected with, who's a thief, but also those around him that he chooses to rob, when he chooses to become intimately involved with one of the women that they stole from. It almost starts to seem like Bill has become more confident when he approaches this woman at a pub and attempts to socialise with her, and they appear connect, helping Bill to become a little less introverted.

One of the things that made his lifestyle clear was the fact that he had a fairly long beard and long hair, and by the way he is dressed, which we all know, says a lot about a character in the film world. The way this character is dressed appears to be done intentionally to make people appear homeless, or with very little. I got the idea of his desire to follow those with a better life from when Bill begins following this man in a smart suit and briefcase (later revealed to be Cobb). Following this (pun intended), they start a conversation with each other, in which Bill is very secretive about why he follows people, it starts to appear that Bill doesn’t want to seem creepy to Cobb. This gave me the idea that Bill idolises Cobb from the beginning because of the clear success he’s had and, even after not knowing each other for very long, they end up robbing apartments together. Bill seems to just go along with it, almost giving you the idea that he needs someone, and he follows this person and everything he does because he feels so lonely and considers him a friend. Even later in the story when Cobb punches him for making a mistake, Bill still calls him up because he clings to Cobb, and the prospect of not being alone anymore. 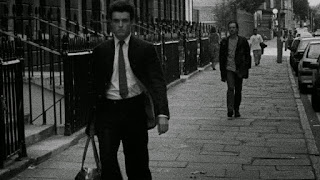 Bill ends up joining Cobb as a burglar after he intrigues Bill with the kind of things he got from the most recent place he burgled. As they're doing this I found one of the lines he says whilst he's teaching Bill to be quite interesting. He tells Bill that you should really take these items away from people to show them what they really had. Because people don’t realise how much or how little something means to them until it’s gone. Which becomes quite ironic for Bill, after he chooses this life, because later down the line he starts to lose a few things of his own.

And the story begins to make Cobb appear more and more questionable when he starts to say that he’s thought out the whole plan for how he’s not going to get caught, but doesn't tell Bill how, when earlier on in the story he was clearly showing Bill how to break into people's houses and do the job that he does. So why cover up how he plans to cover his tracks? Well as we start to find out a few things about the two of them, such as that Bill really aspires to be like Cobb when he chooses to cut his hair and shave his facial hair off so that he looks near enough like him, and that Cobb is sleeping with a woman that Bill says he’s been seeing.

Nolan seems to develop this character in an interesting way over time, and we start to question his plans for Bill more and more as Bill starts to change more, as he is doing all of these things to seek Cobb’s approval. To begin with he is simply making Cobb think that he is actually selling one of the woman's things that they stole, by stealing money from a safe and giving it to Cobb, so he could return the items to the woman, since he’s grown to care about her. But over time it starts to become clear that this woman can't be trusted either as Cobb has a connection of sorts with her in whatever he is planning, teasing her when she asks if she is actually going to get her stuff back.

And over time Bill also starts to do more questionable things. To begin with it seems like he is doing minor things, such as lying about his name, or robbing a guy who gets his money from doing horrible things, but as we start to see this woman appear to be sleeping with a person that isn't Bill, despite the fact that she kissed him and makes Bill believe there is a connection between them, makes us question if she is lying about her ex-partner really being this “nasty piece of business” she claims. This is where things really started to play with my head in particular, because a lot of the time it's hard to understand what the truth is in this film. We really don't know much about the woman’s ex-partner, only what the woman has said, and it's quite likely that she lied about being with the man who she calls a “dangerous person” altogether to get some evidence of Bill robbing a place whilst looking similar to Cobb. This starts to lead me to believe that Nolan's goal from this film was to teach people to not become so attached to the idea of not being alone that you would become friends with even the worst of people, instead try to connect with people or attend youth groups instead of following them, which may lead to somebody approaching you that is dangerous, or cannot be trusted.

Now, one of the questionable things that I noticed to begin with was that Bill uses the name of a person whose card Cobb gave to Bill, saying that he should use the man's card to pay for their meal, which also suggests that Cobb wants to make Bill start doing things himself, and Coles lack of involvement in the stealing starts to become more and more clear. Cobb starts to do hardly anything when they both break into one of the houses, leaving Bill to take everything and keep the items in his house, because he cares about the woman they robbed. Bill then starts to do these jobs on his own whilst calling Cobb, almost asking for his thoughts just so he can tell Cobb that he’s doing things on his own to try and once again, seek his approval. But one of these jobs leads him to knock a guy out with a hammer, that Cobb suggested that he use. That kind of makes things a little more suspicious, and as the story goes on I start to wonder if Bill actually killed that guy, and we as an audience can at this point, either hate Bill or feel very sorry for him, for what his loneliness has made him do. You kind of get a similar feeling in Memento when the main character becomes so frustrated with the games that “Teddy” is playing with him because of short term memory loss, that he tricks himself into believing that teddy is his wife's killer, which would make some grow to hate him, because you can wonder how many he’s made himself kill, simply because he didn’t like them.

This film, like a few of Nolan's other features, doesn't have a happy ending, it’s one that seems to send a message more than anything else. That you shouldn't become easily attached to someone when you feel lonely. That you should have faith that you will find someone you can talk to if you force yourself in the right situation. Otherwise, when someone finds out how desperate you are for approval, they may use you to do whatever they want, or to cover whatever tracks they've made for themselves (in terms of crime). Like many of Nolan's works, this story is told in an incredibly clever way, that keeps you thinking from the start, and it's the kind of film that, if you watch twice, you will be searching for the details of Cobb’s deception, making it even more clever and thought out. It's clear to me why Following leads him to tell a story that keep the audience thinking, and present characters that had their own problems to deal with, since this is very much an insight into the life of a person, that no doubt, someone can relate to.