Doctor Who - The Pandorica Opens & The Big Bang 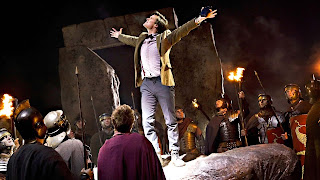 Our Doctor Who expert, Tony Cross, is journeying through all of time and space to bring us his thoughts on every available Doctor Episode. Today is the Eleventh Doctor adventures The Pandorica Opens & The Big Bang...

Here we are. The end of Matt Smith's first season. And Karen Gillan's. And Arthur Darvill's. And, of course, Le Grand Moff himself. A two-part story featuring Daleks, Cybermen, Sontarans and El Sinko de Kitchen, plus River Song and the end of the entire Universe. So, nothing too drastic then. Just a quiet end to a rather enjoyable season.

We begin with a pre-title sequence featuring several figures from previous stories: Van Gogh, Bracewell, Churchill, Liz 10 and, of course, River Song. We sow the seeds. The TARDIS is going to explode. Can it be stopped? Who is doing it? Why? And will any of these questions be answered? Well no, not all of them. It's Le Grand Moff. He likes to leave threads a-dangling as the final scene at the end of The Big Bang makes clear.

It all roles along at a fair old speed. The Pandorica is a legend. It's a fairy tale. It's a box containing something or someone the whole universe fears. Or interested in. In the end it's another trap. A big trap. The Doctor's many enemies gather together to save the Universe from what turns out to be a bit of a misunderstanding. The Universe gets destroyed anyway. Except Earth. Naturally.

The best bits of The Pandorica Opens happen once Rory turns up. Arthur Darvill is rather brilliant at this stuff and just when you think he's just there as big-nosed comic relief he gets something serious to get his acting teeth into. Proof that a male companion can work. I admire the scenes between Rory and The Doctor as they meet again for the first time and it takes the Doctor a little while to realise who Rory is. Then there's Rory's attempt to get Amy to run away from him when he realises that he's about to do something terrible.

Indeed, for me, the multi-jeopardy cliff-hanger at the end of The Pandorica Opens is one of the best in the whole series history. How the blithering 'eck are they going to get out of this one. The Doctor's now a mad man in a very small box, Amy and River are in deep trouble and all the stars in the sky are going out. It's not looking good.

And the beginning of The Big Bang whacks us with a rather lovely little surprise too. It all starts off so well and then we get to see how it was all done, which is slick and clever but feels a lot like cheating to me. As a Doctor Who fan of a certain age bought up on the Blinovitch Limitation Effect and the impossibility of the Doctor saving Adric what Le Moff does, whilst done well, just isn't quite right. If he can do what he does in this story, why isn't the Doctor doing it all the bloody time? What was all that Time Lord Victorious stuff about if the Doctor's going to have a relaxed attitude to the Laws of Time? Are there even any Laws of Time to uphold if there's no one there to police them, except the Doctor himself. 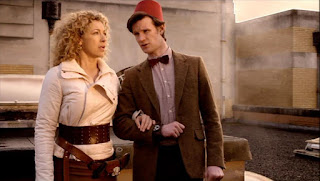 It didn't ruin the story for me. It was entertaining enough. It just felt like a trick. A clever trick. All smoke, mirrors and misdirection. There's no harm in that. It's just less fun. For me.

There were lots of great scenes in both episodes. The Doctor's Stonehenge speech seems to be a popular bit of Doctor Who, but it didn't grab me quite so much this time. Perhaps it's the perennial shouty Doctor problem. I so prefer Matt Smith when he's quiet. He has more power then. As evidence for that I give you his monologue to the young Amelia Pond (Caitlin Blackwood) towards the end of The Big Bang. It's both lovely writing and good acting. That's power.

Oh, and a quick word of praise for Caitlin Blackwood who does a fine job as young Amelia, again.

Karen Gillan herself gets some nice bits and bobs too. Her 'something old, something new' speech at the wedding is great. As is her interaction with the Doctor when he's in the Pandorica.

Then there's Alex Kingston as River Song. There are some people that don't like River Song. I'm not sure why. She's an interesting character - although there's a bit of Bernice Summerfield in there if you ask me - played by a brilliant actress. Yes, sometimes the 'Hello Sweety' stuff seems a bit naff but I like River Song. And she looks gorgeous in her 'stealing paintings' outfit. But I digress. I think part of the problem is that if River Song were the only women in Moff's Doctor Who who was a mysterious puzzle that required solving I think she'd be even better. Unfortunately, Amy and Clara come with riddles of their own. It's like a Sphinx convention.

Anyway, Kingston's great in this. I love her reaction to the Doctor's fez and her cold and angry dispatch of the stone Dalek. Oh, the Daleks in this are the horrible Victory of the Daleks clunky ones, which is a shame. They're like Boris Bus Daleks to the Cusack Dalek's Routemaster.*

So, these are two enjoyable episodes with some genuinely solid scenes but, as I said, sometimes the outs feel a bit like cheating.

*For my foreign readers Google images of Boris Bus London & Routemaster London & you'll see exactly what I mean. One is a classic piece of design. The other a bloated half-arsed tribute.