Doctor Who - The Power of Three 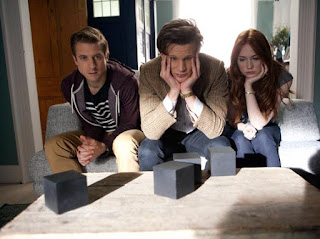 Our Doctor Who expert, Tony Cross, is journeying through all of time and space to bring us his thoughts on every available Doctor Episode. Today is the Eleventh Doctor adventure The Power of Three...

The Power of Three is a tad disappointing, although I like the central idea that an alien race might seek to invade the Earth - and then exterminate Earthlings - using our own curiosity and - in the Doctor's impassioned speech - our hope against us. The don't come in all guns blazing. They do a large-scale guerrilla marketing campaign, which works very well.

There's also something rather lovely about watching the Doctor's inability to handle living an ordinary domestic life. His impatient toddler like reaction to the lack of action by The Cubes. It's also there to throw Amy and Rory's domesticity and their 'should we stay, or should we go' conundrum into sharp relief. Rory and Amy are getting used to having a life lived one day at a time and they're getting to the point of deciding to stay at home permanently.

Again though this story is a whacking great signpost to the end of the Rory and Amy story. We know that we're approaching the end of their story arc - I knew that at the time so I'm not cheating by hindsight here - and this story might as well be called: "The Quiet Sign Post of Fate". There's a lovely conversation between the Doctor and Brian Williams (Mark Williams) that is just this kind of unsubtle hints even if they are well-written and well-acted. This is topped off with Brian's last line of the episode: "Just make sure they come home safe." It's like that moment in a war film where the soldier doomed to die an early death shows photographs of the girl he's going to marry when he gets home. That moment is when his best before date pops up. The same goes for the nice little conversation between the Doctor and Amy on the banks of the Thames about the Doctor's running. It's well-played but ultimately it is another signpost. This way The Power of Three implies is doom. [Cloister Bell]

My final good thing of this episode is Kate Stewart (Jemma Redgrave). She's the head of UNIT now, which is a much more scientific led organisation than it was back in the 80s. Or the 70s. She's also the daughter of the Brigadier. It's a nice performance from Jemma Redgrave and a nice tribute. I particularly like the Doctor's goodbye to her at the end of the story. It's a new addition to the Doctor Who mythology - note the lack of use of the word canon - and a good choice of actor.

So that's the good stuff.

There are things I don't like and two are linked: the rushed sonic screwdriver magic wand ending and the utter waste of Steven Berkoff. This story makes me realize why JNT wanted rid of the sonic screwdriver. It's too much of a cheat. And it makes the ending so rushed as to virtually be insignificant plus I fear that most of the people who had been cardiaced on Earth would be dead by the time the Doctor solves the problem even in the rushed way he chooses to do so. But obviously that would be hideously bleak, so I can understand why they didn't do it.

And then you cast Steven Berkoff as the villain and then his scenes with the Doctor are so under-stated as to virtually be a conversation between two slightly annoyed people in a library. Steven Berkoff's can go so OTT that the wallpaper peels off the walls but he can also be genuinely utterly terrifying. It's such a bloody waste of an opportunity. The Shakri - for it is he - could have been played by anyone the way it is done. Let Berkoff be Berkoff I say. But I'm probably in a minority here. New Doctor Who is much less hamtastic than old Doctor Who used to be on occasion - with the possible and unfairly highlighted performance of John Simm as The Master and I miss the villainous ham. Who is going to remember the Shakri?

Actually this is one of the few stories where I think Matt Smith's performance doesn't quite strike true. There's too much toddler and not enough quiet power for my liking. It's one of the few Matt Smith performances that doesn't really hit the heights for me with The Curse of the Black Spot being the only other one I felt similarly about.

So basically a forgettable story with a few nice moments. It's not a bad story but it isn't there to do much else than emphasise the Doctor, Amy and Rory relationship. Almost every episode since The Doctor, The Widow and the Wardrobe has seemed to be designed to show us the dangers of the Doctor's existence and to make him feel bad.

Not one I'll rush to re-watch I must say.