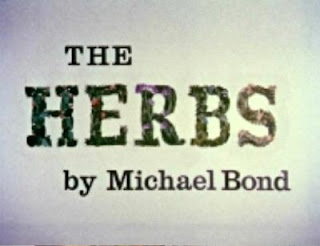 Since it's her choice of theme day, we kind of have to let Susan Omand do what she wants. What she wants, as an old person now, is to go gardening...

Way back in the mists of 1968, before Paddington Bear was even a glimmer in the jungles of darkest Peru, the author Michael Bond wrote a TV series about a lion. A green lion. Called Parsley. Who lived in the walled garden of a very posh house with all his friends that you could only get into by saying the magic word, “Herbidaceous” to open the gate in the wall. Yes, these were The Herbs, a series of 13 15-minute long stop motion animations, followed by a spin-off series of 32 five-minute shorts called The Adventures of Parsley, that ran in the spring of 1968 and they have the honour of being the first TV programme that I can clearly remember watching (on repeat, obviously, as I didn’t come along til much later in 1968).

It was the characters that I remember more clearly than the actual stories, and the fact that they each had a little one verse song that was “theirs” to introduce them – you thought Bod was the first kids show to give its characters themes? Ah, no. The Herbs got there first. Let me tell you about them.

Top billing must, of course, go to Parsley himself. With a mane that looked like the curly leafed herb, Parsley was quiet and timid to start with, although he developed into quite a laid-back lion in the sequel in which he was the main character. Thoughtful, sensible and intelligent, he was the perfect foil for the mania of…

Dill the Dog. Frenetic doesn’t even begin to describe the scurrying pup with incredibly fluffy ears, who got into huge scrapes because he acted without thinking and had always to get help from his best buddy Parsley.

The last of the “main” (or should that be mane…) [no, no it shouldn’t – Ed] animal characters is the owl, Sage. Not quite as sage as his name would suggest, this was a very curmudgeonly owl who flapped (but never flew that I remember) and squawked in the background rather than taking centre stage but was always a presence in the garden.

The garden where they lived was owned by Sir Basil and Lady Rosemary. Stereotypical ex-Raj aristocrats, Sir Basil is the ruddy-nosed tweed wearing blustering buffoon, only really dangerous (to himself mostly) with a blunderbuss in hand. Lady Rosemary is the perfect partner for him, tall and elegant, highly efficient and organised, she is the one that tends to rule the roost, but they’re not the only humans that visit the garden. Someone has to keep the garden looking in tip top condition and that’s…

My favourite, Bayleaf the Gardener, prone to nostalgia and story-telling in his wonderful west-country accent. Apart from Parsley and Dill, his was the song I remember most too, because my Dad kept getting the words wrong and annoying me by saying Bayleaf was polishing the lawn rather than tidying it. In hindsight, this may have been deliberate. Anyway.

The other frequent visitor to the garden was the pompous and authoritarian Constable Knapweed, although who he thought he was keeping control of was anyone’s guess. However, he took a lot of notes so he must have been good at policeman-ing in my young eyes - my uncle was a policeman so I knew these things.

There were other characters that dropped in for one off visits too. The two I particularly remember were Tarragon the Dragon (who looked remarkably like the soup dragon from the Clangers that started the next year, so they may have been related) and the marvellous Indian fakir, Pashana Bedhi, complete with turban, basket of snakes and bed of nails. No, you wouldn’t get off with that these days.

So those were The Herbs. Gentle little stories, filmed in bright colours although shown first in black and white at lunchtimes and teatimes, that introduced the garden world to little me. Imagine my surprise, then, when I discovered that there were actual real plants named after them!